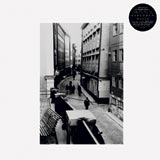 Affectation as a metaphor for struggles with intimacy — people with acoustic guitars were hitching to that post even before the young Joni Mitchell began twiddling with tunings. If an emotional eruption can cause a heartrending break in the voice, then a full string of quavering, hesitant or fractured lines will bring the listener close to the most extreme tortures of the soul. These are some of the calling cards for Wells. Akin to many of the best modern alt-folk artists, he’ll also dissemble and reconstruct his verses by placing them alongside faux-stately and ghostly orchestration. Bon Iver and Fionn Regan have made great inroads in just the last few years, and it’s to be hoped that Louisville’s Wells likewise matures rapidly and grows confident in his ability to put over a song. He pitches an aching-with-sensitivity singing style, yet lyrics and arrangements as on “Diamond in the Sea” and “To Live in Dreams and Memories” have significant emotional depth and cinematic scope — there’s no need to prime the pump. Saredren Wells performs on WFPK’s Live Lunch Friday, and again that night at Glassworks ($5, 7 p.m.).