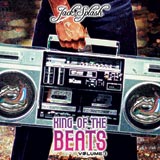 Future beats, personified. These are two of the three planned mixtapes leading up to Jack Splash’s major label debut, though this is far from the first time you’ve heard Splash. Beyond his two albums under the name Plant Life (The Return of Jack Splash and Time Traveler), Jack has produced or written for the likes of Alicia Keys, John Legend, R. Kelly, Missy Elliott, Kelis and Jazmine Sullivan. He is responsible for one of my favorite songs of the last 10 years, the bouncy pop perfection known as “Right Now” from the unreleased (aborted?) Jack Splash and Cee-Lo Green are The Heart Attack LP. Featured in the film “ATL” and released only on a promo sampler disc from nearly four years ago, “Right Now” uses a classic “Tighten Up”-style guitar lick bouncing over synthesized horns and a syncopated bass that would raise the dead. These mixtapes are full of all new, original production and lyrics. They certainly are nearly as strong as his two proper albums. Forget what your brain tells you about Los Angeles rap — this is the sound of L.A.