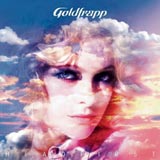 It’s a backhanded compliment to call Alison Goldfrapp the thinking person’s Lady Gaga, but it’s true. I’m not saying Lady G stole 90 percent of her sound from Goldfrapp’s 2005 album Supernature, but anybody who thinks she’s a breath of fresh air needs to get out more. Having said that, it ain’t as if the sound was entirely unprecedented when Goldfrapp did it, but she does it very well, which must be why the band has returned to the glitter-disco genre after detouring down a circus-themed, bizarro folk cul-de-sac on 2008’s Seventh Tree. Featuring (what I hope to God is parodistic) cover art that wouldn’t look out of place on some lost Olivia Newton-John album from 1978, Head First is an ’80s homage much in the same way Supernature was a ’70s. Maybe ’90s shoegaze on their next disc? Regardless, Head First is as accessible as anything they’ve ever done, and the tunes dance right up to the edge of cheese without stepping over. Well, maybe once or twice.