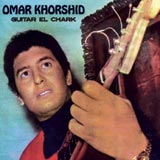 This fantastic new collection highlights the mid-1970s work of Egyptian guitarist Omar Khorshid, whose music bridges the gap between the propulsive energy of 1960s American “surf guitar” (itself an invention of the half-Lebanese Dick Dale, known as the “King of the Surf Guitar”) and the engaging melodies of traditional Middle Eastern music. After finding fame in Egypt as a guitarist and actor, Khorshid moved to Lebanon to record for the Voice of the Orient label, from which these songs are licensed. The entire album is chock-full of Khorshid’s gorgeous melodies on guitar and synthesizers, accompanied by hyper-furious percussion. Recalling an idyllic yet cosmopolitan age before the Lebanese Civil War, Khorshid’s music conjures both nostalgia and a limitless future. Released in a gorgeous, double-vinyl gatefold edition with copious liner notes, Sublime Frequencies has once again excelled at re-introducing the obscure beauty of Middle Eastern music to Western audiences.