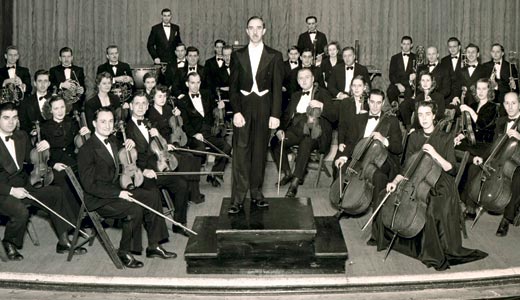 “Music Makes a City” should be required viewing for mayoral hopefuls everywhere. The new documentary explores the founding of the Louisville Orchestra, with a spotlight on one of its champions, then-mayor Charles Farnsley. During his tenure, Farnsley manages to confirm the Confucian belief that the arts promote not only civic happiness but also prosperity. This is evidenced by the arrival of corporations like General Electric in the 1950s, which cites Louisville’s commitment to new music as a reason for moving 30,000 jobs here.

The film’s other hero is conductor Robert Whitney, who nurtures a ragtag group of plumbers and teachers from the ranks of semi-pro musicians to a philharmonic that attracts global acclaim. The film charts the orchestra’s under-funded first decade, which is on the verge of collapse when Farnsley takes office in the late ’40s. But the new mayor, an avowed aesthete, enacts a drastic revamp. His boldest stroke is taking money earmarked for visiting soloists and spending it on commissions for new works from the world’s foremost composers.

This results in hundreds of pieces of modern music originating in Louisville. Though not always appreciated by a town with a taste for standards, the orchestra’s neo-classical world premieres would help circulate the city’s reputation as “the home of new music.” The orchestra would go on to host a visiting contingent of Soviet composers that include Dmitri Shostakovich; perform a renowned, original work at Carnegie Hall with modern dance legend Martha Graham; and win the first-ever Rockefeller grant given to an arts organization: a stunning $400,000 in 1953.

More stunning is how little is known about this part of the orchestra’s history — even here in Louisville. Directors Owsley Brown III and Jerome Hiler have done well to document what is certainly one of this city’s most significant cultural achievements. Brown says the legacy of the orchestra’s mid-century work is still felt today. He goes so far as to say singer Will Oldham, the film’s narrator, is a “spiritual grandchild” of Farnsley and Whitney’s accomplishments.

Despite this, the Louisville Orchestra’s contribution has gone somewhat unrecognized, if not nearly forgotten. More than one person involved with the film was quick to point out the orchestra’s omission from Alex Ross’ “The Rest is Noise,” considered the consummate guide to contemporary classical music. This type of oversight may come to an end on Thursday, when “Music Makes a City” premieres at both the Brown Theatre and Baxter Avenue Theatres.

The filmmakers began assembling this project more than five years ago and were fortunate to have started when they did. Some of the composers interviewed have since died, and archival material is becoming increasingly scarce. There was a relentless search for footage of the ’50s-era orchestra, much of which ended up in the Dumpsters of WHAS-TV. Eleanor Miller Bingham, who was working at the station when it was sold, told Brown she witnessed the disposal of all the 16mm newsreels of the orchestra.

“Boy, oh, boy, history is fragile stuff,” says Brown, who stresses how close this story came to slipping away from us.

Writer and co-director Jerome Hiler had better luck collecting sound recordings, but he echoed this theme when describing a chance discovery at a used record shop on San Francisco’s Haight Street. Hiler stumbled on an entire collection of rare Louisville Orchestra LPs just sitting on the floor before him. While discussing their importance and his plans for the film with the clerk, the store phone rang. A customer was calling to inquire about the very records being discussed and was told he was too late.

“This must be some kind of sign,” Hiler says. “If I had waited another minute, someone else would have bought the records.”

It was Hiler who selected the music for the film, which meant scouring a rather large trove of recordings. He estimates that he’s listened to 85 percent of what the orchestra put on vinyl and included their most cinematic stuff in the film.

If there’s a third hero in this picture, it is the soundtrack, which is featured in a way that’s uncommon for a documentary. Interspersed with the history chapters are neoclassical music videos of sorts. Large sections of the orchestra’s commissioned works are set to scenery that was shot around Louisville and other relevant cities. The visual information is basic — shadows of tree limbs bending in the wind, or an anonymous housepainter plying his trade in a distant, apartment window. The shots are long, the edits are slow, and the camera is locked down, presenting the viewer an opportunity to sit back and consider the notes being played.

Asked about how this structure came about, producer Robin Burke reveals that it grew from a template set by “Night Waltz: The Music of Paul Bowles,” an earlier Owsley Brown documentary. For that film, the team had almost unfettered access to Bowles’ music, with one important caveat.

“Bowles insisted that we never have talking heads or any narration over his music — so that was a challenge,” Burke says.

From that past challenge evolved a music-forward editing style that lends itself to Brown and Hiler’s current film. It helped the filmmakers succeed in two of the objectives they set for themselves early on — one was to make a movie that promotes inspired leadership, like Farnsley’s, and the other had everything to do with the Louisville Orchestra’s commissioned recordings.

Of that music, Hiler says, “I wanted to make sure people could hear it.”