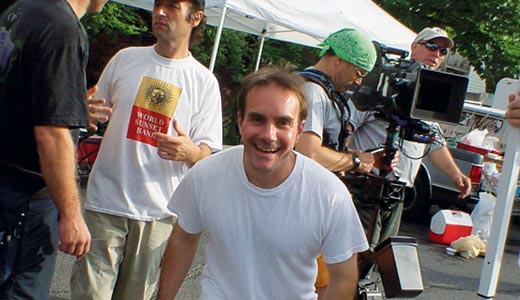 Archie Borders on the set of "Paper Cut"

It was the first question I heard at film festivals, teaching a workshop or during a radio interview to promote a new movie — “What was your budget?”

OK, that was usually the second question, following: “What’s your film about?” Because in the early ’90s, a boom time for indie film in Louisville, the unspoken thought behind such a question was this: If you can raise, make and sell your film for (insert low budget here), then maybe I can do it, too.

Me: Where’s the money coming from?

George Maranville (producer of the Sundance-selected “100 Proof”): Well, Ben Daughtrey (from Love Jones) knows the guy who runs Mammoth Records, who wants to put some songs in a film that will play at the South by Southwest Film Festival.

That was one way.

Whether it was through the low-budget, spend-and-pray method (aka maxing out credit cards), begging friends to work for free, or having your rich family pony up the trust fund (a cause of envious resentment among us un-trust-funded filmmakers), someone was always trying to make feature films in Louisville.

And a lot of people did.

Ron Schildknecht tapped a local zeitgeist with his short, “The Legend of the Pope Lick Monster.” Chris Lovenko (along with members of Love Jones) made “Heavy Date,” which eventually led to the feature “Easy Sex.” I had “Reception to Follow,” which got me my first producer’s rep (John Pierson, who found Spike Lee), who, in turn, helped out George “100 Proof” Maranville, who then helped me help Shane Taylor (“The Gray,” “Death Tunnel”), and so on — which then inevitably leads to the third most-asked question.

“Who worked on it?” In other words, who produced, who edited, who shot, who key gripped/gaffed … because this wasn’t Los Angeles where, if you needed a Best Boy (a set electrician), you could pick from hundreds, maybe thousands. In Louisville, there were two. Maybe three. So everyone who crewed on films did a bit of everything. I produced, line-produced, production coordinated and managed, location scouted, assistant directed, second assistant directed, even key PA’d (main gopher). Basically, if you weren’t willing to do lots of different jobs on the set — the high and the low — you would starve.

This was a small but talented, dedicated network of filmmakers. And everyone worked on everyone else’s films. Who was the director of photography on that one film — Elliot Greenebaum’s “Assisted Living,” or my next one, “Paper Cut,” or Taylor’s “Death Tunnel” and “The Gray,” and who also contributed Second Unit footage for “Keep Your Distance”? That would be Marcel Cabrera. Who provided the Grip Trucks? Oh, then you want Steve Staley. Who was that kid who worked on your last film and then moved on to Stu Pollard’s movies … and then came in to help out on Bruce Romans’ “How You Look to Me”? That would be Matt Ware. The indie film scene was a lot like the music scene, with songs ending up on local film soundtracks. Just between Pollard and myself, I think we utilized 30 different Louisville bands, all on different movies. There were other films screening at national festivals and on specialty cable channels: “Half-Cocked,” “Southern by the Grace of God,” “Fake I.D.” (whose crew, shooting down the street while we made “Paper Cut,” stole food off our craft service table). Mike Fitzer shot docs for the History Channel, Robin Burke shepherded “Night Waltz.” The list goes on.

So, what’s happening now? We have a more literate film scene thanks to the Louisville Film Society. High schools like St. Francis, Fern Creek and Kentucky Country Day School have film programs or burgeoning film clubs. Digital cameras make achieving beautiful images more affordable for the budding independent. And Louisville-based producers like Hart Lunsford and Gill Holland have funded films on a national stage. Former Louisville expatriate Peter Byck (who made a splash with his mid-’90s doc “Garbage”) has come back to premiere his new film, “Carbon Nation.” And a handful of longtime Louisville supporters have tirelessly petitioned the state government for tax incentives to bring bigger-budgeted productions and talent to the commonwealth.