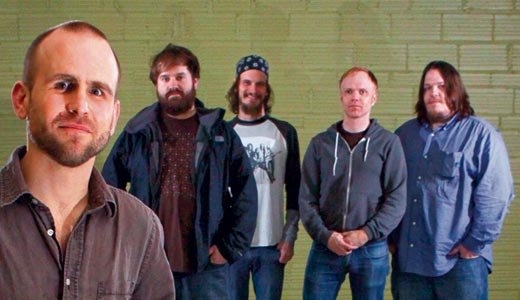 At the core of a reunion the band swore would never happen is an effort to help an old friend. “I don’t remember the exact moment, but we probably met at a show,” singer Rob Pennington says of Jason Noble, the musician/filmmaker who is undergoing treatment for cancer and needs assistance with his medical bills. “At that time, everybody just hung around and went to the same parties.”

Endpoint’s post-hardcore chug held little in common with Noble’s endeavors in King G. & the J. Crew, Rodan, Rachel’s and Shipping News. But Noble’s fanaticism is geographical. “Jason brings a level of honesty to independent music. He loves Louisville music, because it’s from Louisville, despite the genre. He’s a cheerleader.”

Formed in 1986, Endpoint influenced thousands of post-hardcore and emo groups long past its last show at Brewery Thunderdome in 1994. They won’t be the only ones reigniting past practices: Sunspring, which played Endpoint’s last show, and Big Wheel reunite Friday. While Cerebellum and past EP colleagues, Cleveland’s Face Value, bring it Saturday.

“It was weird in the days leading up to it, and it was very emotional, but once we got in there, it was normal,” Pennington says of the first rehearsals, which took place in March. “It felt very normal to play with (guitarist) Chad (Castetter), (singer-guitarist) Duncan (Barlow) and (bassist) Pat McClimans.” Drummer Tommy Browne, who was a member of Pennington and Barlow’s post-EP project, By the Grace of God, will join the group.