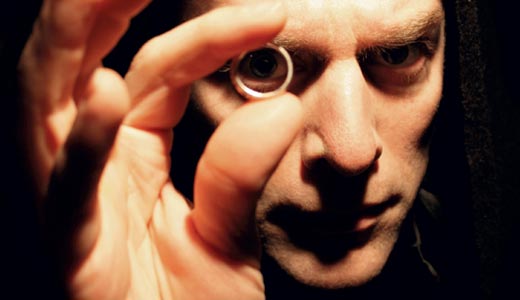 This saga begins: A long time ago (the late ’70s) in a galaxy far, far away (Canada) … when two epic trilogies met inside the mind of a single obsessed little boy named Charles Ross. It was here that The Force met The One Ring to Rule Them All.

“‘Star Wars’ and ‘Lord of the Rings’ I came across when I was a kid,” Ross recalls. “So I think there’s something inside that inner-child that still has excitement and exuberance toward those stories; that’s kinda what I tap into when I’m on stage.”

The genesis of this show was launched by Ross in 2003 when he debuted “The One Man Star Wars Trilogy.” “Trying to make it as a working actor in Canada is sorta like trying climb over the Rocky Mountains using your lips,” Ross says. “It’s a difficult road to take. I figured if I wanted to do anything in theater, film or television, I had to move to the U.S. or try to make something that was different and my own — but something I could travel with. And ‘Star Wars’ is everywhere, so making this one-man dork-fest show was a way for me to use a huge franchise in a very economical way.”

As a skilled impressionist and a performer of the absurd, he decided he could not only adapt his favorite cinematic trilogy, but he could play all the roles himself — and that’s just what he did. After 1,800 performances all over the world (including an audience with George Lucas himself), Ross decided he needed a second show he could travel with. He returned to the childhood well and aimed his unique talents at the other trilogy that consumed his youth … and thus began work on a one-man adaptation of J.R.R. Tolkien’s masterwork, “The Lord of the Rings.”

Of course, one can’t help but wonder what Tolkien would say about Ross breaking down his 3,000-page opus to an hour-long CliffsNotes version. “He’d probably tell me to get a life, or something far more articulate than that. I don’t know, I think he’d be somewhat bemused by the fact that something that took him so long to write and create has now been reduced to this miniscule tidbit of a story. I’m sure he’d be able to appreciate the editorial feat of reducing something so dense into something so small.”

You may wonder about the logistics of how one man assumes the role of more than 40 characters, live on stage. But it’s his one-of-a-kind, rapid-fire delivery — with interplay between such classic literary characters as Gandalf, Frodo and Gollum — that makes this a must-see show for any theater enthusiast.

And when asked to describe his show, Ross laughs, “There’s comedy, there’s absurdity, there’s verging on times of being serious … It kinda rides the line between an homage and a parody at the same time. So it’s kind of all of those things, and yet nothing specific.”

Ross brings his one-of-a-kind show to the Kentucky Center on Friday as part of LEO’s “A Little Off Center” series.

And once he’s taken “One Man Lord of the Rings” all over the world, one can’t help but ask: What’s the next trilogy in his crosshairs? “I don’t know,” he says. “The problem with trilogies is that they keep getting messed up. Sometimes people need to have the ability to make one good story and leave it up to people’s imagination, rather than blowing out an idea until it weakens the steam of the whole thing. But maybe if the third ‘Batman’ movie is any good …”