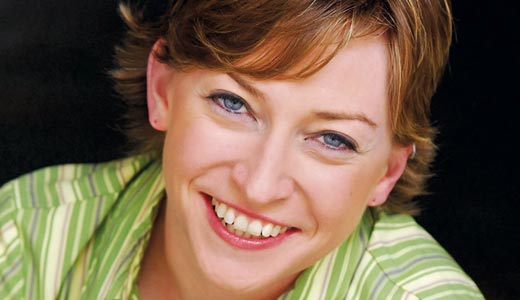 Kristin Key was raised in Texas, the daughter of an ultra-conservative preacher, with big dreams to one day become a stand-up comic. “I wasn’t allowed to watch a lot of dirty comedy, so the first stand-up I ever saw was Bill Cosby. But as I got older, I started watching people who actually got to swear,” she says. “Sam Kinison, George Carlin and Steve Martin — and of course the females Kathleen Madigan and Ellen, who I always thought was a brilliant writer. In fact, I have her album on my iPod right now.” In 2006, her life changed forever, though, when she stood in line to be a contestant on NBC’s “Last Comic Standing.” This weekend, she’ll be performing at Comedy Caravan.

LEO: Has your father being a minister affected your act?
Kristin Key: I think just having his approval has let me kind of ease off and not be as dirty. Now I try to write cleaner and more clever material, just to challenge myself.

LEO: You often show up at underground comedy shows when you’re in town. As a professional, traveling comic, is there an advantage to going back to open mics?
KK: Absolutely. If nothing else, those make me more nervous than my regular shows, because now I’ve got something to prove. Even though it’s just a bunch of open mic-ers, you gotta bring it. It’s not just a gimme show — those are usually tougher audiences. It makes you stretch a little bit, it makes you reach and pull out something. It’s hard to watch a show that you’re not being a part of.

LEO: Do any good stories from Louisville stick out in your mind?
KK: The memories I have are few and far between there, because I spend too much time at The Highland Taproom. Last time I was there, the band didn’t show that night, so I had my guitar, and my opening act had a mandolin. So we formed an impromptu band called Kristin and the Kitchenettes. We played the regular band’s entire four-hour set with the gospel songs I knew. It was pretty badass.

LEO: Did you get paid the no-show band’s fee?
KK: No, we didn’t get paid, but we did drink for free, which is almost like getting paid.

LEO: I hear you’re a favorite at the Caravan, because you go out drinking with the staff after the shows.
KK: I do. Which is a little tough on me — I usually have to spend a couple of days when I get home from Louisville recovering. It seems like a good idea every time.

LEO: People here know how to drink.
KK: Yes they do. And having the bars open until 4 a.m. is a dangerous, dangerous thing when you’re trying desperately to be good. It kinda works against you.

LEO: Cats and dogs are game?
KK: Well, who knows … if it’s funny. Maybe watching a canary blow up is the funniest thing you’ve ever seen — why should I deprive the world of that? But I would never kill a live human for a laugh.