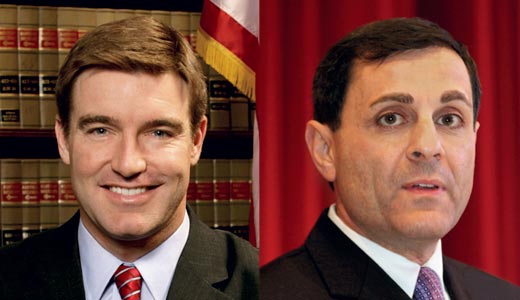 With less than a week to go until May 18, voters across the commonwealth are being inundated by a last-ditch media blitzkrieg courtesy of four wealthy white male politicians who want to replace retiring Republican Sen. Jim Bunning, who is probably taking a nap as you read this.

While there are others running in this race — notably businessman Maurice Sweeney and former DEA agent Darlene Fitzgerald Price — the political calculus will, for the purposes of this article, force an examination of the front-runners. First, it is worth pointing out that LEO Weekly contacted the campaigns of Republicans Trey Grayson (aka McConnell-Lite) and Rand Paul ad nauseum, but neither politician could be bothered to speak with a left-leaning alt-weekly in the biggest metropolitan area in the state, which will likely vote Democrat anyway. We understand — and condemn — their rationale. That said, Paul has enjoyed double-digit leads over Grayson for most of the campaign season, and is projected to wipe the floor with his establishment-centric opponent without even trying. For the true political junky, the real race is between Kentucky Attorney General Jack Conway and Lt. Gov. Daniel Mongiardo, with polls putting them neck and neck within their respective margins of error.

For the uninitiated, Conway, a Louisville native, has served as the state’s attorney general since 2007. He’s the guy you might occasionally read about in The Courier-Journal who busts usurious payday loan lenders, fraudulent telemarketers and child pornographers. If you weren’t too inebriated last weekend, then you might also recall he and his father had a horse, Stately Victor, that ran in the Kentucky Derby.

Mongiardo, a native of Eastern Kentucky’s Hazard County, began his political career in 2000 upon being elected to the state Senate, before going on to serve as lieutenant governor, a position he’s held now for three years. In 2004, he ran unsuccessfully against Bunning, who joked that Mongiardo looks like one of the sons of Saddam Hussein. He also is an ear, nose and throat surgeon who believes his experience as a doctor uniquely qualifies him to discuss and legislate health care reform.

“When I’m elected, I’ll be the only Democratic doctor in the United States Senate,” Mongiardo tells LEO Weekly. “The lawyers and the politicians have done a great job messing up health care. It’s gonna take someone that understands the health care delivery system. It cannot be fixed with politics and backroom deals. It’s gonna take more, it’s gonna take science to fix health care, not politics. My scientific background as a physician gives me the understanding how to approach it a different way.” ?

Conway, however, argues that since his opponent has said he would not have voted for the health care bill and would rather “start from scratch,” he is in line with “people like Mitch McConnell, Rand Paul, and the tea party movement, which have all advocated scrapping legislation that a majority of Americans want and need.”

Of course, Conway and Mongiardo have both differences and a few similarities. Each candidate supports a focus on early childhood education as a direct means of combating Kentucky’s historically low educational attainment levels. They are married, and their wives recently gave birth to their first children (a daughter each), whom they plan to expose to “Baby Einstein” videos. Both advocate a transition from fossil fuels to an amorphous “green energy” economy, supporting nuclear power as a stop-gap measure, even sharing the same lines about liquid coal and carbon sequestration techniques (technologies that are decades from viable commercial application), although Conway appears to have more trouble talking about the glories of coal than Mongiardo, who owns property on a reclaimed surface mine.

The biggest area where these men diverge is the manner in which they’ve campaigned. As a Louisville native, Conway has had to beat back against the “urban versus rural” meme his opponent’s campaign is fond of using.

?“Kentucky has received me very well,” Conway tells LEO. “You know, you peel an onion and you get a lot of layers. My father is from Western Kentucky. A lot of people forget that. I’m sick of these campaigns that pit the city and the country against one another. It’s dishonest and ignores the issues we should be talking about, like creating jobs.”?

Furthermore, Mongiardo’s campaign — masterminded by professional sleaze-merchant Kim Geveden — has taken a page or two from the Bunning playbook. Most recently, Mongiardo embarrassed himself on “Kentucky Tonight” by claiming Conway had received kickbacks as attorney general for raising utility rates, something the AG has no control over. Numerous news outlets and politicians had already asked Mongiardo to stop talking nonsense, but he persisted despite the fact that he has used his publicly allotted $30,000 housing allowance to further a private real estate deal.

The most egregious falsehood circulating the blogosphere, hands-down, concerns a rumor — allegedly disseminated by a Mongiardo staffer — that Conway’s Derby horse was named after a former gay lover. Really.

“I’m never surprised by politics,” says Conway. “How my father and I came to name the horse ‘Victor’ is well documented. My best friend Victor died in a car wreck when he was 23. We had his whole family in over Derby. I have paid homage to my best friend by keeping his name alive. I don’t have to defend that, but anyone who would peddle that is a peddler of petty, false garbage and a bigot. I’m not surprised that Daniel Mongiardo and some of the people he employs have dragged this race into the gutter. But it’s not about me, Daniel, Trey or Rand. We have 11 percent unemployment in this state, families are being ripped apart by this economy. We need a new U.S. senator to represent us in a different way.”

Regarding even more petty, false garbage, Mongiardo spent an inordinate amount of time during an interview with LEO talking about the glories of the coal industry. Specifically, when addressing he and Gov. Steve Beshear’s adventure tourism initiative, the candidate remarked that the No. 1 natural tourism draw is “a trail,” and that “Kentucky is poised to capitalize on this fact because we have a lot of coal truck hauling trails that are ripe for the picking…

“And those (tourism) jobs” says Mongiardo, “can’t be exported to China.”

We couldn’t make this up if we tried.