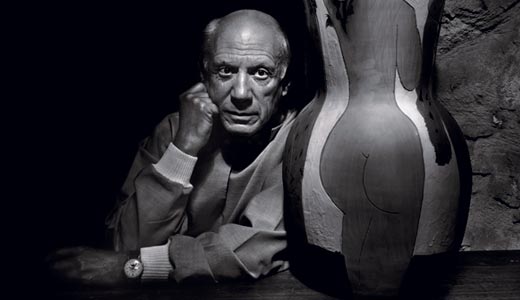 While I am an art historian by trade, I’m a film historian by design. After years of self-directed study, including the viewing of an assortment of classic films, I have iconic portraits of actors in my head. Turns out many of those images were “Karshed.”

“The Most Famous People in the World: Karsh 100” exhibition at the Speed Art Museum features photographs by Armenian/Canadian Yousuf Karsh (1908-2002). It’s a film buff’s — as well as a historical and artistic — delight.

What you get with a Karsh image is a reverent, posed portrait in great theatrical lighting. They are people at their public best, even if they are scowling, like Winston Churchill. After studying with his uncle in Canada, Karsh apprenticed with Boston photographer John H. Garo. He realized during his three years at Garo’s studio that he preferred to create portraits of visionaries. “My desire was to photograph the great in spirit, whether they be famous or humble,” he said.

He opened his own studio in Ottawa, Ontario, Canada, in 1932, stamping his photographs with soon-to-be-famous “Karsh of Ottawa.”

Karsh was chosen as one of the 100 most influential people of the 20th century by “Who’s Who in the World.” His portraits were used to accompany the text of more than half of the other 99. The people who shaped the world’s history shaped his art, such as Albert Einstein, Helen Keller and Mother Teresa. He retired in 1992, after 60 years in the business, leaving an image legacy that included U.S. presidents Hoover to Clinton and Popes Pius XII to John Paul II.

He had a fondness for actors, especially the members of the Ottawa Little Theatre. He went on to photograph such acting notables of his day as Boris Karloff, Clark Gable and a young Elizabeth Taylor.

His 1956 portrait of Audrey Hepburn in profile is one of her iconic images. Karsh wrote, “Years later, in the Kremlin, Chairman Brezhnev agreed to sit for me only if I made him as beautiful as Audrey Hepburn.” The resulting portrait is not in the show, unfortunately, but we can guess what happened — Karsh could only work his magic to a certain degree.

Humphrey Bogart’s 1946 pose amidst swirling cigarette smoke is appropriate for the heavy smoker who died of cancer in 1957. Probably wouldn’t be Bogie without it.

But let’s not forget the artists. Pablo Picasso went against his self-absorbed reputation when, in 1954, he actually showed up for his appointment with Karsh. “To everyone’s amazement … (he) was prompt and wore a new shirt,” Karsh said. “He could partially view himself in my large format lens and intuitively moved to complete the composition.”

Georgia O’Keeffe’s 1956 profile of her seated in natural light by an open door has special significance to Louisville now. Karsh’s estate recently gave this image to the Speed Art Museum. It is so beloved that the portrait also hangs in the house museum at Abiquiu, N.M., part of the Georgia O’Keeffe Foundation.

There are other Karsh-Louisville connections: Muhammad Ali’s hands; the 1938 wedding party of Canadian Anne Edelstein and David Shapira, whose family owned Heaven Hill Distillery; and Louisvillians Lisa and Karen Shields playing the piano during their 1990 visit to see their Canadian grandparents.