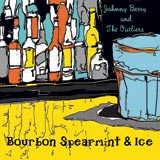 Johnny Berry is the local king of sad-bastard country music. And from the sound of the new album with his band The Outliers, Bourbon Spearmint & Ice, he won’t relinquish that crown anytime soon. On Opener “All the Whiskey in Kentucky,” Berry sounds as drunk and distraught as his lyrics claim to be. And on “Handwriting on the Wall,” his voice feels as worn as the soles of Berry’s old boots. The most consistent thread on this album, however, is The Outliers — an outfit of incredibly talented musicians assembled to back Berry; Eli Hall’s steel guitar is a steady throwback to the classic country tunes I grew up on. But ultimately, the band’s ability to blend seamlessly into the landscape of Berry’s old-fashioned country songs is its best attribute of all.