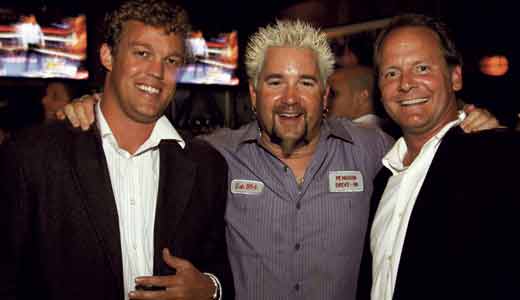 I thought it would be selfish to enjoy the delights of Derby alone this year, so I invited my three most hardcore party animal friends from across the pond to do the rounds with me. Emma, David and Hasz, a girl and two gays, know good parties: no drinking contest is too tough, no dance-off too challenging, and certainly no hangover is enough to put them off drinking again a mere few hours later. In England, Kentucky is still best known for being the land of fried chicken, and I wanted them to report back on the sophisticated parties and hip clubs Louisville has to offer. They graciously accepted my invitation and arrived in the bluegrass last Thursday, armed with a weekend’s supply of Ibuprofen, cooling facemasks and glitter.

First stop was the Ferdinand Ball at the Frazier International History Museum. This fundraiser was to promote the belief that winning horses should be sent to a nice retirement home in the countryside, not a soap factory. My British guests were, of course, instantly wowed by two things: 1) The hats — yes, England has the Ascot races, but the hats here were bigger, better and brighter (could we expect anything else from Americans?) and 2) Louisvillians are the friendliest people in the world. I’ve traveled the globe, and perhaps it’s this hospitality that has encouraged my husband and I to settle here. You simply can’t have a bad time surrounded by bourbon-lubricated Kentuckians with flowerpots on their heads. Maria Menounos, host of “Access Hollywood,” said a few words at the party, the goody bags were better than I’d ever seen at an event in Los Angeles or New York, and there was an open bar with delicious canapés. Doing good never felt so right.

Friday night wasn’t such a success. After a filling dinner at The Grape Leaf, we ordered a taxi at 10:30 p.m. to take us downtown to Prime for Joey Wagner’s much talked about Playboy party. At 11:30 p.m., the taxi still had not arrived, and the lady on the other end of the line advised me that when I’d been told earlier “It’s on its way,” that was merely an expression and in fact my order had not even been placed. My visitors and I took to the rockers on my porch and kept our spirits up with another bottle of wine. It worked until 12:30 a.m., when another inquiry as to the location of our taxi led nowhere, and we reluctantly headed to bed, dreaming of bunny ears and vodka shots. We awoke the next morning and determined only a Derby night at Fourth Street Live could make up for the previous evening’s woes.

The Sports and Social Club was the place to be Saturday night. We persuaded a friend in a high place to give us VIP passes and headed into a back room (again, with a free bar — hooray). The soiree included chef Guy Fieri, a very loud and obnoxious Joey Fatone (the fat one from NSync, who at one point soaked my group in champagne fizz but didn’t feel the need to apologize) and skier Bode Miller, who loved throwing back shots as much as my English chums. Salt from Salt-n-Pepa was there and didn’t look too upset by my husband’s drunken rap rendition of “Push It,” although I was. The party raged until 4 a.m.

So what did the out-of-towners think of their first Derby? “I love Louisville!” was the most quoted phrase of the trip, even while sober. They decided they’d never been so drunk, never seen so many hot men, and that Lynn’s Paradise Café is the best place on earth to settle your DTs. Will they be back? Hell yeah!