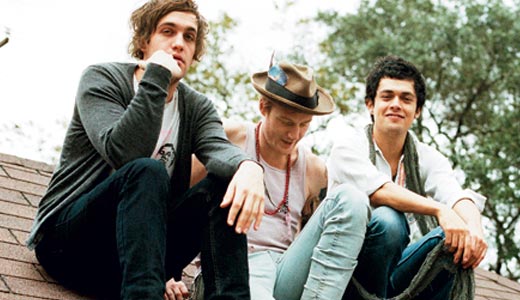 Harlem performs at the final Free at the Z concert May 12.

You can only be standby for so long. Merideth Kaye Clark, cast in the standby role for Elphaba in “Wicked,” at the Kentucky Center this month, performed the role more than 100 times in 30 cities waiting for her chance to step onto the stage. In the meantime, she wrote her folk-pop debut Young Stellar Object, which she’ll perform from Sunday at the Monkey Wrench (1025 Barret Ave., 584-2433). Her backing band includes some of the production cast, and her co-stars are slated to attend. Showtime is 10 p.m. No word on cost.

23 reasons
Tom Shear found the outlet for his rhythms when he formed Assemblage 23 (www.assemblage23.com) in 1988 after hearing a DJ spin industrial music at a Depeche Mode concert. Influenced by early Human League, The Cure and New Order, Shear performs Thursday at Uncle Pleasant’s (2126 S. Preston St., 634-4147). Angel Theory, Absence of Faith, as well as DJs Count Grozny, Sodom, Sideshow and The Osiris Ani guest star. The 18-and-up show is $15 and starts at 9 p.m.

Harlem shakes
Matador artists Harlem trade in ramshackle singsong on their new album, Hippies. They perform at 10 p.m. Wednesday, May 12, at Zanzabar (2100 S. Preston St., 635-ZBAR). Read about their mysterious accident involving a girl with a White Zombie T-Shirt at www.matadorrecords.com. This will be the final concert in “Free at the Z” series.

Music Cast
Drew Sellers, who performs under the name Saredren Wells (www.saredrenwells.com), joins us to talk about his new solo effort, Memories Are Hunting Horns. Listen at Bluegrass Catastrophe, bluecat.leoweekly.com