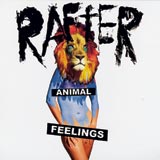 Studio engineer Rafter Roberts sat behind the mixing boards for the Castanets, Fiery Furnaces and labelmate Sufjan Stevens. While his own records have followed the same kitchen-sink approach that colors his engineering résumé, they’ve tended to be much noisier and disjointed affairs — in a good way. Rafter apes Midnite Vultures’ hypersexual put-ons and shares Beck’s knack for deconstructing disparate genres. But on Animal Feelings, Rafter smooths a lot of the rougher edges of his more experimental side in favor of bass-heavy, dance-floor pop jams. His mastery of studio craft is highlighted in the album’s detailed textures, but as far as his take on R&B-laced pop music goes, the most memorable and catchy chorus belongs to one of the record’s least energetic, “Never Gonna Die.” The ham-fisted assertiveness in a lyric like Get your ass on the floor from “Timeless Form, Formless Time” doesn’t quite jive with sentiments elsewhere, such as on “Love Makes You Happy.” Still, there’s plenty of graciously unserious fun at work here, even if the affectations are more of an act than any sort of expression.