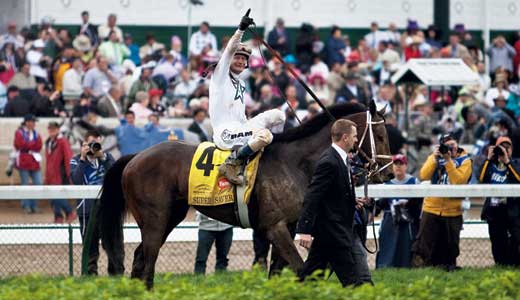 Everybody is smarter than me.

All the study I put into picking the Kentucky Derby — it doesn’t matter. Seeing every Derby prep, evaluating bloodlines, getting up before the crack of dawn to clock early-morning workouts — it doesn’t matter. Nor does experience or reports from knowledgeable sources. No matter how I put all the pieces together, I only occasionally pick the Derby winner. And was wrong again this year.

Which wouldn’t be that disappointing, knowing the real odds of anyone picking the winner of the Kentucky Derby are one in 20. There are 20 horses, and only one can win. When you factor in past results that show the winners can range from the strongest favorites to the most unlikely long shots, one realizes just how difficult it is to pick the Kentucky Derby.

Or you could just bet on Calvin Borel.

It’s not just that Borel has won three of the past four Kentucky Derbies, it’s that right now, he is the Magic Rider of the Magic Race. People believe in him.

This was my 47th Kentucky Derby, and I have never heard such a roar from a Derby crowd as the one Calvin Borel received after winning the 136th Run for the Roses.

It started when the No. “4” jumped to the top of the tote board as track announcer Mark Johnson called Super Saver taking the lead. The crowd yelled wildly all through the stretch as Borel asked for everything and Super Saver gave it to him.

But the finish wasn’t the end.

After the wire, the jocks pull up their mounts as the field goes around the Clubhouse turn. They all finally slow, and then head back to be unsaddled — the winner left farthest around the bend, to return alone in triumph. A wave of applause always courses along section by section as the winner comes into sight — a respectful salute to the newest thoroughbred king.

But this was different. The crowd didn’t just applaud; when Borel punched an arm into the air, the crowd boomed a roar of approval that stretched the quarter-mile length of the grandstand. In all my Derbies, I’ve never seen, or heard, anything like it.

No rider ever before rocked the stands when he won like Calvin Borel, who now has the most loyal legion in modern horse racing history.

Sensing the show shouldn’t really be so much about him, Borel cut out the arm waves and bent a little lower on Super Saver, parading the winner beneath the Twin Spires.

Here was a horse that had won in the slop last November at Churchill Downs, and hails from the illustrious Raise a Native sire line that has now won 16 of the past 21 Derbies. But I wasn’t impressed when he couldn’t pass a tired speed horse in the Arkansas Derby and didn’t pick him — which mattered not to the throngs at Churchill Downs. The Oaks Day crowd opened Super Saver as the Derby favorite, and he still was a solid second choice at post time on Saturday. People who are obviously smarter than me bet Borel like he would win, and roared with approval when he did.

But how does he do it?

“Well, you have to have the horse,” Borel later explained. The wiry 43-year-old rider from Catahoula, La., who now lives in Louisville, noted Super Saver was able to save his spot throughout the race — along the rail, just behind the leaders.

“On the backside, before anybody got head up with me or in front of me, I creeped up and got there ahead of them,” he said. “Then (turning for home), the horse that was in front of me, he was stopping so fast, I wasn’t going to go inside of him, so I went around him … Nobody was really crowding where I was, so it wasn’t much.”

And so he won, just the way everybody (except me, I guess) thought he would.