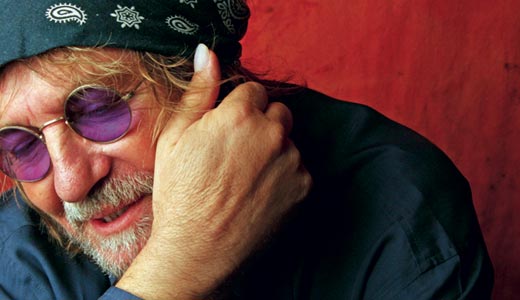 Ray Wylie Hubbard is the kind of musician who spent his life stranded in the abyss between folk music and the blues, which eventually left him doing country. After 40 years, Hubbard is probably best known for having penned the Jerry Jeff Walker hit “Up Against the Wall, Redneck Mother.”

“We were sitting, goofing around at a party, and just did a parody on ‘Okie from Muskogee’ from the other way,” he says. “But the problem with irony is that not everybody gets it. We really kinda meant it as a dis on that redneck, right-wing, country-music establishment. All the sudden, they ended up accepting it and singing along to it.”

Thankfully, Hubbard hasn’t been content collecting royalties on a song he wrote four decades ago. This year, he released a new album called A. Enlightenment B. Endarkentment (Hint: There is no C) on Bordello Records, a label owned by his wife. “I’m 63 now. About two years ago, I decided to quit being a young country hunk and just concentrate more on the writing,” he laughs. “But there were no restrictions on any of these songs; each song is a little part of me — cut off and put on paper.”

Hubbard’s childhood in Oklahoma and Texas was rooted deeply in religion, which is often the foundation of his songs. “I don’t think I’m battling it … I’m just aware. I can observe and write songs about both sides — I can write about ‘The Four Horsemen of the Apocalypse’ or ‘Whoop and Holler,’ but I can also write about drunken poets and deceased call girls.”

“Tornado Ripe” recalls his time growing up in Solper, Okla. It describes his fear as an 8-year-old when a tornado ravaged the town: It was if God himself was belchin’ and growlin’ and spittin’ on the ground … And all directions of the compass was death and kindlin’.

“Drunken Poet’s Dream” is a romp through the mind of an infatuated artist. “It was just the idea of poets — Dylan Thomas, Edgar Allan Poe — guys obsessed with love. What kind of woman would run around with a guy like this? She would have this certain attitude; she would have to have a certain grit about her to hang out with guys like that,” he says.

Asked whether modern country has sold its soul to the devil, Hubbard laughs. “I don’t know if country music has a soul to sell anymore. The devil used to have a lot better taste when rock ’n’ roll was the devil’s music. He’s lost his way if he’s doin’ mainstream country.”