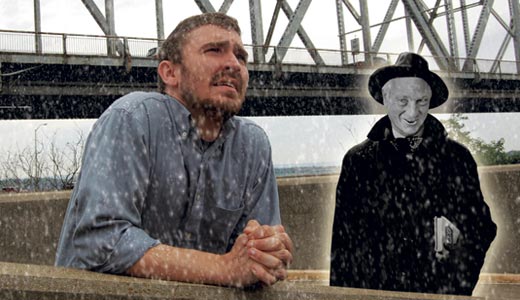 Moments after Tyler Allen lost the Democratic nomination in Louisville’s mayoral primary, I walked a couple of blocks to the Second Street Bridge with the intention of throwing myself off it.

So that’s it, I thought. All our coverage showing the other guys were just wealthy phonies and braggarts, and for what? So they could win handily? What’s the point if nobody pays attention?

Stepping onto the pedestrian railing, I leaned forward slightly, peering downward into the distant, murky abyss. The water was dark and looked calm under the partly cloudy moonlight.

Louisville doesn’t need LEO … Why should I even bother? What’s the point of writing if nobody gives a shit?

As I climbed over the rail, a gust of wind knocked me back onto the narrow sidewalk. Picking myself up, a stranger approached and helped me to my feet.

“You could’ve gotten yourself killed,” he said.

“Yeah, thanks.” I got a good look at him — an old, white-haired man in a crisp pin-stripe suit with a newspaper rolled underneath his arm. “Look,” I said, “Thanks and all, but I really gotta be going …”

The stranger laughed. “Where could you be going that’s so important, Mr. Meador?”

“Your name? Why, I read LEO of course. Once a newspaperman, always a newspaper man, eh? I’m also an angel, by the way.” The stranger extended his hand. “George Barry Bingham Sr., former publisher of The Courier-Journal and The Louisville Times. Call me Barry.”

I thought I was hallucinating; that years of recreational drug use were finally catching up with me. I tentatively shook his hand, but before I could speak, he filled me in on the details of our metaphysical predicament.

“I’m trying to get my angel’s wings, Jon. Can I call you Jon? OK. Before I died, I sold the C-J to an evil corporation, and ever since then, God has forced me to walk the earth, trying to right wrongs, like ‘Quantum Leap’ minus the time travel, until I’ve atoned for that grave error.”

I shook my head. “This is crazy. You’re not really an angel. This is some kind of prank, man. Get away from me.” I began walking away.

When I showed up at work the next morning, I noticed my keycard wouldn’t open the door. Confused, I tried calling my editor but realized her number wasn’t in my cell phone. In fact, I didn’t have any numbers for any of my co-workers.

I started banging on the Plexiglas doors when a white stretch limo pulled up behind me. A door opened, and Barry Bingham stepped out.

“Having some trouble?” he asked.

Barry slapped me in the face. “Get with it,” he hissed. “This is just another empty building owned by Todd Blue. There is no LEO, only Zuul.”

“Zuul?” I asked, rubbing my cheek.

“Yeah, Zuul. It’s Gannett’s alt-weekly. Now get in the car and stop being such a pussy. I want to show you something.”

As we drove, I noticed yard signs for “Northup 2010” littering the cityscape. Barry informed me that because John Yarmuth never had a platform for his progressive ideas, there was no one who could successfully unseat her. “Now he spends all his time golfing, while Northup is planning a run for the Senate. Looks like she’ll win, too.”

“Oh,” said Barry, “but the scary’s just getting started. In a world without LEO, Doug Hawkins is the mayor, the Metro Housing Authority is still corrupt, and Stephen George never hired you, because he’s driving this limo.”

I demanded that Barry put an end to this at once, that he return me to the real world or I’d sue his ass, but he declined. “I’ve got one more thing to show you,” he said, “and then maybe you’ll understand why LEO is so important, and I might finally get my wings.”

We drove to The Courier-Journal’s Broadway headquarters. “Just watch,” said Barry. After a few moments, the front doors burst open and a guy who looked like me was thrown to the curb.

“That’s right,” said Barry. “You’re totally unemployable. Now do you see? Shortly after getting fired, you wind up exchanging sexual favors for food from a cop.”

I then was standing on the Second Street Bridge again, staring into the abyss. As I walked toward land, a barge blew its horn. A woman waiting for a TARC bus remarked, “Every time a barge blows its horn, an angel gets it wings.”

The woman next to her shook her head. “That’s the dumbest shit I ever heard.”