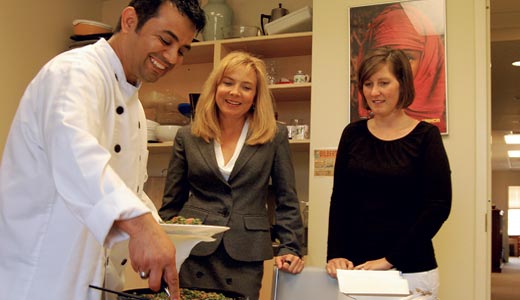 Duraid Abdulrida used to be the television chef for “Good Morning Iraq.” During the early years of America’s misadventure there, about 10 million people watched Chef Duraid’s segment on the show every morning, making him one of the most recognizable faces in Iraq.

Now he’s a refugee living in Louisville, not even the most visible person at Ramsi’s Café on the World, the Highlands restaurant where he works most nights as a line cook.

That’s not such a bad thing for Chef Duraid; he says line cook is his favorite job in the kitchen.

“I worked in so many restaurants — five-star restaurants,” Duraid says, including Baghdad Tower, formerly known as the International Saddam Tower. “Back then,” he says, “everything was ‘Saddam.’”

It was the best job he’s ever had.

“There were so many people coming — presidents, ministers,” he recalls. “I felt like, ‘I’ve arrived at the top.’ I was really a chef. I had more than 56 people working in my kitchen.”

Outgoing, personable and arguably one of the best chefs in Baghdad, Duraid was a strong candidate to be the chef on “Good Morning Iraq,” the morning news and talk show on Iraq’s Al-Iraqiya station. Network officials dined at the restaurant where he was chef and were wowed by both his food and charisma, ultimately offering him the television gig.

It was a prestigious career move, but one that would ultimately make him the target of terrorists.

Duraid accepted the job in 2004, a time when Iraqi Media Net — the media network that owned the Al-Iraqiya station and the Al-Sabah daily newspaper — was less than two years old. Iraqi Media Net was a project of the Coalition Provisional Authority (CPA), the U.S.-led transitional government in Iraq for the 14 months following the topple of Saddam Hussein. The idea was to promote an independent free press (at least ideally).

The CPA funded and oversaw the operation, hiring a group of American media experts to set up a media infrastructure in Baghdad and more or less teach employees of Iraqi Media Net the ins and outs of journalism. But the network was not allowed to edit or analyze the news conferences or photo ops orchestrated by the CPA and often were ordered to broadcast the press conferences of CPA Administrator L. Paul Bremer in their entirety.

By the time the CPA turned over control of Al-Iraqiya to the Iraqis, the station’s credibility as an independent news source had been crippled, and there was a wide perception that the station was nothing more than a mouthpiece for Americans.

“Obviously, the United States and the CPA were running it,” says Don North, a senior adviser for Iraqi Media Net who was tasked with training Iraqi media professionals. “Certainly anyone in Baghdad in those days who worked with Americans was often a target for terrorists.

“Many Iraqis who worked for the U.S. Embassy were critical that the embassy was not able to offer more stringent security — making them stand in long lines outside waiting to get into their job, which made them targets,” adds North. “And it was the same with Al-Iraqiya.”

Most mornings, hours before he would appear on camera, Chef Duraid would shop alone in the market. “It was fun and tiresome at the same time,” he says. “I got used to working in a dangerous place.”

Eventually, though, the danger became too great. First, a neighbor spotted men lurking outside Duraid’s house. “People were telling me ‘They’re trying to kill you,’” says Duraid.

Then, as he was driving home from the television studio one evening, Duraid looked in his rearview mirror and saw four men with guns in the car behind him. A chase ensued all the way to Duraid’s house. As he ran inside, the men started shooting, blowing out windows. The barrage of gunfire ended when the shooters saw an armed guard approaching from a station behind the house.

After the attack, Duraid decided he couldn’t keep his wife and children in Iraq. He moved in with extended family, about 20 miles south of Baghdad, where he was protected for nine months while making plans to leave the country. In November 2005, he fled with his family, bouncing between Jordan, Egypt and Syria, where in 2009 he began the process of moving to the United States as a refugee.

Permanent resettlement — in this case in the United States — is an option of last resort, used only if a safe return to the refugee’s home country is impossible. Only 1 percent of all refugees actually fall into that category, according to the U.S. Department of State.

Once permanent resettlement in the United States is approved, the refugee is assigned to a resettlement organization. For Chef Duraid, that’s where Kentucky Refugee Ministries (KRM) stepped in. The Highlands-based nonprofit, which resettled about 500 refugees in Louisville last year, sets up apartments in advance of a refugee’s arrival, provides English and cultural orientation classes, and — the toughest part — helps the refugee find a job.

The organization’s job placement rate used to be astonishingly high — executive director Liz Kaznak says 90 percent of refugees found jobs within their first four months in the country — but has waned with the economy. The four-month statistic is now closer to 40 percent, and Kaznak says it takes about eight months for a refugee to find a first job.

Many Iraqi refugees are wealthy and highly educated, Kaznak says, but their qualifications don’t carry as much weight in the United States, meaning they often are forced to take jobs below their ability and pay grade.

“We have physicians who come and it takes up to five years to get recertified” in the U.S., Kaznak says. Until then, the displaced physicians, dentists, chemists, biologists and other professionals find themselves mopping floors and washing dishes to earn a living. “That’s almost the rule,” she adds. “It’s not only common, it’s the way it is.”

But Chef Duraid was one of the lucky ones, finding a job in his field of choice.

KRM used its close, long-standing relationship with Ramsi Kamar, owner and namesake of Ramsi’s Café on the World, to get Chef Duraid a job. Kamar, who gives regular seminars for KRM’s clients on adjusting to working life in the United States, says the language barrier is Duraid’s greatest handicap. “The language is a big problem for a lot of refugees,” Kamar says. “In order to work well (in the kitchen), you have to be able to communicate.”

Despite this hurdle, Kamar says he was pleased to have a person with Duraid’s qualifications preparing food in his restaurant.

“He does a great job over here,” Kamar says. “He’s a nice guy, his family is very important to him. He gets along great with people.”

And while Chef Duraid says he is happy to have a job in the field he loves, it seems his aspirations are higher. In Iraq, the renowned chef was used to having complete autonomy when he cooked, and he’s still adjusting to the reality of working in someone else’s kitchen. “I’ve been working in five-star restaurants, making my own food,” he says. “If I was in America all this time, I’d be famous.”

He’s probably right: Occasionally, Duraid hears from former colleagues who used to work in his kitchen in Iraq, telling him they have moved on to high-profile jobs, working for public officials or fancy restaurants. “They call me and say, ‘It’s all because of you,’” he says. “I just say for everybody, ‘Good luck,’ and I’m proud of myself for training them. But the good thing for me is, I’m just trying to save my family. I just feel I’m safe right now.”