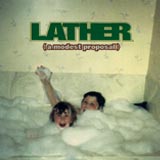 Where more than a few local groups turned to one person to handle vocals, singer-guitarist Jeremy Podgursky and bassist Brian Kaelin, both formerly of Dybbuk, divided those duties and conquered. Their ever-shifting harmonies always caught you off guard in the best kind of way. Repeated shows at The Machine/CD Graffiti’s/The Enterprise in St. Matthews — if you didn’t see them, you weren’t trying — were intense if for no other reason than it seemed Brian Toth wouldn’t let you lock into him for long (I believe that’s called “math rock” nowadays). But when he did, as in the end of “Sorry” … god. Unsung is an understatement. Given where indie pop is now, A Modest Proposal, the band’s lone full-length, remains ahead of its time.