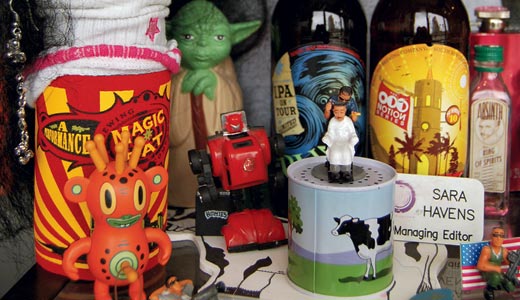 LEO has been around for 20 years, and I’ve been here for half of them. I was only supposed to stay for two or three years — cut my journalism teeth at a gritty alt-weekly in Louisville. Get some experience and good clips, and be on my way to New York … or maybe L.A. … or I hear Ireland is fun in the fall. This is what I told then-editor Cary Stemle as he grilled me on AP Style, fondness for organization and general areas of interest. Hard news was never my thing, I told him. But music, arts, theater, profiles of interesting people, nightlife … these are my things. He shrugged his shoulders, broke out a few riffs on air guitar and said I was hired.

So here I sit, nearly 11 years later, staring at a desk that merits its own episode of “Hoarders.” This drawer is filled with boxes of business cards — I think my title has changed about six times. I started as assistant managing editor, even though we had no managing editor. I got to make up my title once — here’s that box of associate editor cards — for some reason I just can’t part with it. Here are my red scissors labeled “Cherry Bomb” from the days I’d spend my Tuesdays in the layout room, physically cutting and waxing the paper together. We didn’t start to electronically paginate the paper until the mid-’00s.

This drawer has tiny cassette tapes from my old-school recorder. Here’s the Debbie Gibson interview, my first. I didn’t write much in the early years, staying busy behind the scenes keeping the trains running. But when I heard about a guest appearance by Debbie in a Broadway Series production of “Joseph and the Amazing Technicolor Dreamcoat,” I melted on Cary’s office floor. “Um, why don’t you interview her,” he suggested. And so I did. And then I learned celebrities are mostly douchebags with inflated egos and daddy issues. Here’s the ticket stub from when I met Bea Arthur after her one-woman show at the Kentucky Center. Exhausted from the performance and wanting to be alone, she looked at a bumbling journalist in front of me and said, in a low, satanic voice, “What do you want me to do?” I was next in line, frozen in place. Waiting for the flash of the camera, with her frail arm wrapped across my shoulder, felt like an eternity.

Here’s a guitar pick from when Joan Jett played the State Fair two years ago, reminding me that some celebrities are badass. Music Editor Mat Herron hooked me up with her tour manager, who set up a meet-and-greet for my friends and me. Ms. Jett was so flattered by our hero worship that she let us hang out on stage during the concert. I will never forget that evening. Nor will I forget the three days Cary sent me to “fire training” school for journalists — like LEO covers breaking stories about fires. I now have a firefighter helmet that smells of cinder and flashbacks of being rescued by fellow classmate Joe Arnold of WHAS. If it weren’t for pictures, I’d never believe it happened.

Here’s a VIP lanyard from Jillian’s — that place was so much fun when I first moved to town. Friday happy hours were legendary. I won $500 once by carrying an egg on a spoon across the deck, and Jillian’s is where I learned a tough lesson about mixing red wine and black licorice. It’s also where I did shots from a Jager bottle poured by Vanilla Ice, saw Bob Dylan, and flirted with Cyrus from “The Real World” at a Hootie concert. I’ll even cop to seeing Hanson there — and marveling at the short bar and bathroom lines for that show.

Speaking of short bar lines, here’s the Ashlee Simpson sock puppet Stephen George and I interviewed for a cover story when the actual Ashlee declined our request. Besides the parents required to be there, my friend and I were the oldest (and drunkest) people in the Palace that night. I made $100 by switching seats with some crazed fanatic, which put us farther back and on an aisle — perfect.

Here’s a framed picture of my first cover story, a profile of Francene Cucinello. I remember sitting across the table from her at O’Shea’s during our first interview as she rattled off all the things that occupied her days. I was fascinated by and jealous of her drive, and I often had to steer the conversation back to her when she started quizzing me on relationships, passions and future plans. “Sara’s the best writer in Louisville” is how she would introduce me to her friends — but I always wondered if that was because I wrote 3,000 words about her.

Here’s a shot glass, three bottles of beer, a coozie, a pink flask and bottle of Cruzan rum that reminds me how the Bar Belle came to be. Somehow my reputation for late-night socializing preceded me, and I always had interesting yet spotty stories to share around the water cooler, from which I was guzzling in the morning hours. I was often the go-to bar application. “My buddy’s in town and wants to get laid, what bar should he go to?” “It’s Tuesday at 4, where can I get two-for-one margaritas?” “Who pours the strongest drinks?” “Who has the best bloody mary?” “Who has the most Dale Jr. swag?” “Where can I score a rich husband?” “Where can I get my lesbian training wheels?” So finally one sober Friday afternoon, Cary said, “Why don’t you write about what you do on the weekends? At least it’ll give it some purpose.” We started a nightlife feature called “Past Your Bedtime,” and when I became the sole writer of it (after our interns went back to school in the fall), we changed it to the Bar Belle.

So here I sit among a decade of clutter. Should I burn it? Scrapbook it? Sell it on eBay? Who knows, it may take me another 10 years to decide. But for now, I’ve got a kegger to cover.