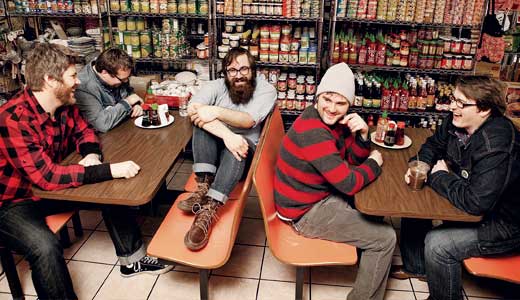 Outside of Amarillo, Texas sits a ranch. It’s fairly unassuming and so remote, you could hear a whisper coming a mile off. “There’s nothing, nothing else out there for sure,” says Bryan Simpson, lead singer for roots ensemble Cadillac Sky. As you travel by, the only landmark you’ll see are the seven or eight Cadillacs halfway sticking out of the ground.

Like those automobiles, Cadillac Sky was in a rut.

“On our last few records, we had used the studio as the sixth member of the band,” Simpson says. “We felt like our recordings weren’t giving a good idea of who the band was live and who the band is at its core.”

Cadillac Sky found a collaborator in Dan Auerbach, a connection that came about as a sister act: Guitarist David Mayfield’s sister is Jessica Lee Mayfield, who opened for The Black Keys on a recent tour. Her brother tagged along as tour bassist and passed one of the band’s albums to Auerbach, himself quickly becoming a working producer.

“He heard something in there that he dug, but he didn’t like the production,” says Simpson, who also plays mandolin, guitar and violin.

Joining Auerbach at his studio, Akron Analog, the quintet set out to make Letters in the Deep — due out in June on Dualtone — feel live, organic, perfect, Simpson says. “Our approach is song-centric: We let the song decide what the instrumentation was.”

Simpson grew up in Texas attending bluegrass festivals with his dad. He picked up mandolin after watching Bill Monroe and listening heavily to the work of Ricky Skaggs, Tim O’Brien and the Del McCoury Band.

In recent months, Cadillac Sky has allied itself with an organization called Mocha Club, which trains indigenous pastors in Africa and fights to rescue victims of human trafficking. Simpson says he learned about Mocha Club after watching a documentary on the group.

Simpson is happy to see the group becoming a conduit for more than just notes and gigs. “It’s a way for us to do something outside of ourselves, help other things besides ourselves,” he says. “The world has a way of keeping you humble most of the time.”