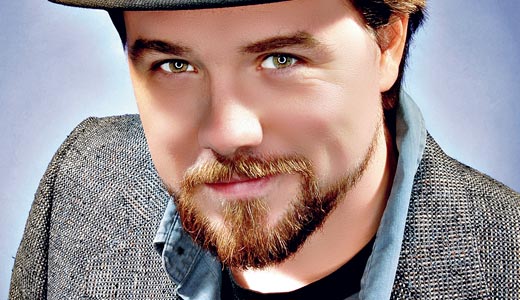 Paul Strickland is one of the most in-demand comics on the circuit today. The Nashville native, who now lives in Louisville, will be doing a rare run of local performances this weekend at Comedy Caravan. His special brand of humor isn’t filled with the usual punch lines or quirky observations — but draws from his personal experiences in a more narrative style of comedy. Just wait until you hear what exactly happened to him in Balbknob, Ark. His distinctive sense of humor is also featured in “A Brighter Shade of Blue,” a one-man show he hopes to perform in Louisville before taking it to some national festivals all over the country this summer.

LEO: How much of your act comes from your day-to-day life?
Paul Strickland: It’s not terribly observational … but I would say 75 percent of my act is true, and 25 percent is the way it should’ve been. All of the stories are based in reality, but there’s not a lot of: “What’s the deal with coffeehouses?” Part of my act is about my experience in a town called Balbknob, Ark., and trying to navigate how to have a good time in a place that was just inherently a terrible place.

LEO: Have you ever said something on stage and immediately thought, “Hey, that was way too personal?”
PS: I’ve done that plenty. When I first started talking about my divorce, I didn’t really know where the line was, and it would get a little too much for the audience to handle. The key to it, for me, is to take something that’s personal, that’s honest and is true and find a way to talk about it in a way that entertains strangers. That’s the challenge of comedy, I think — to find a way to craft honesty and truth into something that’s funny.

LEO: Being a road comic, do you find that certain jokes work differently in different parts of the country?
PS: There are regional restrictions to certain things. For example, I’m playing Memphis this week; Memphis is only about an hour from Balbknob, Ark. — so a lot of people in the audience have experienced what I experienced there … so that material is going to kick off really well there. But if I were in Little Rock and some people had family in Balbknob or “The Balbknob greater area,” it would very possibly not go over as well.

LEO: Besides Balbknob, do you have any other road horror stories?
PS: Yeah, that’s kind of the allure of being a comic … a lot of folklore that comes with being on the road full time has to do with those crazy stories. I’ve had one-nighters where there was no microphone, or the marquee outside just said: “Free Buffet and Comedy.” But part of the fun of it is you can claim you survived it.

LEO: How do you handle making people laugh in such unfunny venues?
PS: In a situation like that, it occurs to you while you’re on stage that most of those people are there for the buffet, which is free, and not for the comedy. There is nothing worse than subjecting people to comedy against their will, but you have to make the best of the situation. I don’t take it personally, because I can recognize that the situation is setup against me. It would not be dissimilar to showing a movie in a bar where people are there to play pool. People aren’t going to pay attention to the movie, but it’s not the movie’s fault.

LEO: What’s worse telling a joke and getting a silent room — or the awkward courtesy laugh?
PS: Oh … getting a courtesy laugh is way worse, absolutely. If what I’m trying to do is find a way to make people laugh at honest material, the last thing I want is them to laugh dishonestly. To me, a courtesy laugh is the worst thing that could possibly happen. I would way rather have people not get it, or just not care.

LEO: What was your worst heckle?
PS: A guy who was incredibly drunk, stood up and leaned against a table, and in the middle of a story that had nothing to do with zoos or anything, he yelled, “Giraffe vagina!” I have no idea why … he just yelled it out. I had to stop, because everyone in the room heard it, and I had no snappy comeback to that. What do ya say — “Well, that’s a thing that just happened”?

LEO: Tell me a little about the play you wrote.
PS: I’m doing it at two fringe theater festivals this summer, one in Indianapolis and one in Orlando. It’s a one-man show called “A Brighter Shade of Blue.” It’s about being a fairly naturally negative person and finding a way to talk myself into being happy after my divorce.