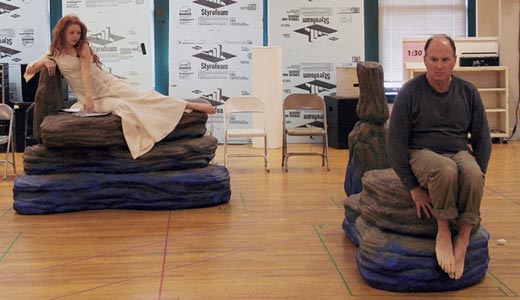 I’m grateful to live in Louisville for many reasons — one of them being Actors Theatre and the Humana Festival. I’m grateful for the chance to see so many new works in such a short amount of time. I’m grateful for the opportunity it gives playwrights and the opportunity it gives the audience. It proves every year the importance of theater — of new voices, styles and insights. And it proves, year in and year out, that audiences are excited and ready for anything and everything.

The best thing about this year’s Humana Festival of New American Plays was the diversity in the productions. It wasn’t just the basic differences of comedies and tragedies, small plays and large productions, single playwrights and collaborations — the entire festival ran the gamut. There was life, death, coffee, music, cockfighting, tigers, memories, an abortion clinic, balloons, photographs, overhead projectors, produce, invaluable art, kissing and crying practice, and … well, literally everything including the kitchen sink.

I was pleasantly surprised with “Sirens,” which seemed to be a deep play about life and commitment wrapped in a romantic comedy. It was sweet without being cheesy or absurd. It was funny and witty with fantastical moments and ideas, while remaining grounded and realistic — and the song that ran throughout (in all the varying forms) was really quite beautiful.

The artists who collaborated to make “Fissures (lost and found)” are to be commended. It may have felt more like a workshop piece than a final production, but there were some very nice moments — and a great glimpse at what nontraditional or nonlinear theater can be.

“Ground” was an incredible undertaking — to deal with issues such as immigration, border control, family, love and lust, but the script never hit its stride. The cast was strong, and the production team did well to make it as good as they could.

I thought “Phoenix” had a great script, great cast, great direction and designers. It was a simple production that wasn’t simple at all — delving into the complexities of relationships, life, death and the unexpected turn of events. And with neurotic characters who refuse to be labeled or defined simply by their neuroses, you have a play that many people can relate to.

“Heist” was a bit of a wink and an inside joke for any Louisvillian. It was fun and oddballish with over-the-top characters and storyline. There was no depth or new ideas brought up, but that wasn’t the point. It was simply a fun romp around 21c.

Of all the plays, I anticipated “The Cherry Sisters” the most. It was billed as the biggest show, part of the mainstage season, and the true story of the Cherry Sisters is so odd and compelling, I couldn’t wait to see it. But, sadly, it didn’t at all live up to what I hoped it would or could be.

And then there’s “The Method Gun,” which was, um … hmmm … OK. I have absolutely no idea how to describe it, or my reaction to it. I suppose, in many ways, it was a collaborative piece that brought the extremes of the theater and actors to the surface. It was fun, funny and surprising (the tiger waxing philosophical was worth the price of admission). But it was also at times poignant and beautiful. There were identical “crying practices” that bookended the piece — the first one uncomfortable and ridiculous, the second sweet and heartbreaking. To get from one to the next with all the chaos in between seems to sum up the power of the play as a whole.

As I do every year, I hoped with anticipation as I entered the theater for each new play that I would witness what could soon be an American classic — a play so amazing, so intriguing and beautiful that it would be the reason for the Humana Festival. I mean, seriously, this is a festival of such historical importance that introduced the world to “Agnes of God,” “Getting Out” and “Dinner With Friends.” These are some gigantic shoes to fill and I hope some day that they are.

It might not have been a year where an American classic was introduced, but that doesn’t mean it wasn’t worth it. There were shows we loved and those we didn’t love so much — there were surprises and letdowns — but there seemed to be something for everyone. All in all, it was a fun festival, and, no matter what, I can’t wait for next year.