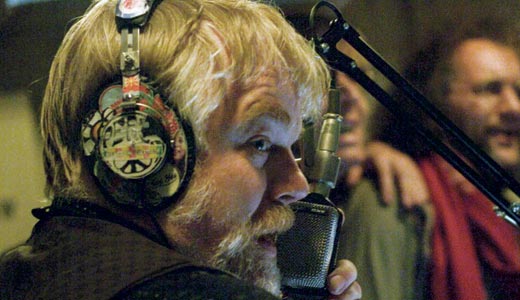 Woody Harrelson goes completely over the top in this all-but-unseen indie dramedy. He plays a slightly dim-witted man who decides to become a superhero and clean up the crime in his city. Problem is, he has no superpowers, just a childlike sense of wonder and a laughable arsenal of homemade gadgets, none of which work. Along the way he rescues a young hooker (Kat Dennings) who becomes something of a sidekick, and arouses the ire of a murderous crime boss. With a great cast including Sandra Oh, Elias Koteas and Michael Kelly, this is a minor gem. Check it out.

If you didn’t catch this at the theater during its too-short run, don’t make the same mistake twice! Philip Seymour Hoffman leads a rag-tag crew of lovable Limey losers in this more-or-less true tale of the birth of British rock ’n’ roll radio. Hounded out of England for playing socially unacceptable music — while the British Invasion was breaking over our shores — they created the first true pirate station on board a rusting old boat just offshore. With the authorities frantic to shut them down, their pranks, shenanigans and general nose-thumbing embodied the soul of the ’60s. With terrific music, Bill Nighy, Rhys Ifans, Nick Frost, Kenneth Branagh and a host of other crazies. Our highest recommendation.

A good old-fashioned marauding-alien monster-movie with lots of blood and tits, just as God intended. You’ll recognize Devon Sawa from “Final Destination,” and maybe some of the hot babes, most of whom get snatched and frozen by the truly icky alien scientist who spits on his prey to scent-mark them for later hunting. Gangs and gangs and gangs of fun.

Samantha Morton (whom we’ve seen way too little of since “Minority Report”) and Steven Mackintosh star as grieving parents who adopt an evil autistic child in this gutsy horror film that was just given a proper release thanks to the popularity of 2009’s “The Orphan.” We love “bad widdle kid” flicks.

This Mexican TV crime series is a bit slow-paced at times but well worth the wait. A loving homage to the Sam Spade era of film noir filled with outrageous plot twists and weird soap-opera-like relationships. For example: In Season 1, The Panther’s innocent girlfriend is killed, but in Season 2, she returns, having faked her own death to become “Reina del Narco” — Queen of the Drug Trade! Wonderful.

The most comprehensive documentary to date about the Grammy-winning pied piper of polka music whose 50-year career changed the American musical landscape. Think that polka is major lame? Well, take your cork out, dummy! Have some fun! As boot-scooting good as good can be.

GONE WITH THE WIND

The Scarlett Edition of what many consider the best American film ever made. Frankly, we were bored with everything that happened after the burning of Atlanta, but this Blu-Ray release is one of the finest examples of film resurrection you’ll ever see; the colors are vibrant and the sound is flawless. With more commentaries, making-ofs, bonus goodies and old news-reelers than any human being could possibly stand. Enjoy.

A welcome compilation from “The Jim Henson Hour” focusing on the joys of nature. Includes the “Fraggle Rock” episode “River of Life” and two shorts from “The Animal Show with Stinky and Jake.” Kiddiestuff don’t get no better than this.

Russell Crowe is the hardened police detective who puts 18-year-old Jon Foster in prison for the murder of his own family. Convinced he has thwarted a serial killer, he is dismayed to hear that the man has been released — so he makes it his life’s work to stop him from killing again. Meanwhile, the killer has been joined by “a fan,” Sophie Traub, who keeps a crazy scrapbook of his every move. What will happen next? As good a psycho-thriller as we’ve ever seen.

The latest from the Broken Lizard comedy troupe. Will Forte, Vivica A. Fox, Morgan Fairchild and others cower before huge Michael Clarke Duncan as “Slammin’ Cleon Salmon”: He’s crazy as an outhouse rat, the former heavyweight champion of the world, and owner of a boxing-themed restaurant. He also owes big money to a Japanese mob boss, so he challenges his waiters to an abusive contest to raise cash.

THREE KINGDOMS: RESURRECTION OF THE DRAGON

Telling basically the same story as John Woo’s “Red Cliff,” this hodgepodge affair starring Andy Lau, Sammo Hung, the incomparable Maggie Q and Vanness Wu is decidedly simpler and less opulent. But while the on-screen talent is superb, writer/director Daniel Lee doesn’t seem to have a clue what to do with them. Disappointing.

WHEN THEY CRY: COMPLETE BOX SET

This dark and decidedly weird anime series is one of the only ones we know that combines traditional “Moe” elements — a bevy of young schoolgirls, some dressed as maids, some with hidden fighting powers, bedeviling a central male figure who is new in town — with almost gothic levels of horror, and a plot that will remind you of “Lost.” For the more adventurous animer.