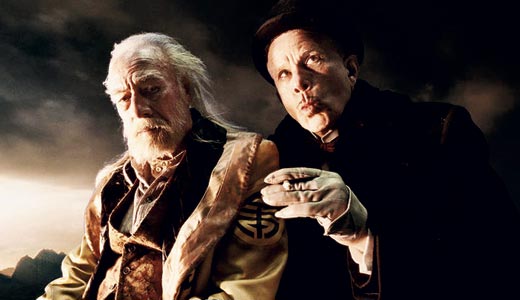 THE IMAGINARIUM OF DOCTOR PARNASSUS

OPIUM AND THE KUNG-FU MASTER

A bit of Shaw Brothers history for sale, cheap. Veteran fight-master Tang Chia directed only three films for Shaw, but, more than any others, they exemplified the action, romance and excitement the studio was known for. This is the last of those three, in which a small town is protected by a Kung Fu school that serves as its police force. Everyone is safe and happy until a rival school — owned by an opium peddler — moves in, aiming to make the town one big opium den. The ensuing battles are some of the greatest martial arts ever filmed. Recommended.

THE IMAGINARIUM OF DOCTOR PARNASSUS

This may be the perfect Terry Gilliam movie: bizarre in the extreme, a visual banquet, an amazing cast, total on-screen confusion and a legendary failure at the box office. That being said, we liked it. Christopher Plummer is the titular doc who sells his soul to the devil (Tom Waits!), then later gambles for the soul of his daughter (blindingly nubile Lily Cole). That final wager involves splitting her suitors into multiple personalities for psychedelic tests of devotion that only Gilliam could have dreamed up. And, yes, part of the reason for the splitting is that Heath Ledger died during filming and was replaced by Johnny Depp, Jude Law and Colin Farrell. Fans of Gilliam will love it.

John Malkovich is a great actor, we won’t argue that, but he can sure pick the damnedest material. Here he’s a divorced English prof in South Africa who seduces a student and gets fired. Then he goes to live with his lesbian daughter where everything’s okie-dokie until they’re attacked by a pack of young blacks. What does it all mean? We dunno. Hey, John! Back off on the artsy-fartsy a bit next time, OK?

Luc Besson’s follow-up to his 2004 cult hit set in the ghetto-clad future world of 2010. This is more of the same — which is a good thing — with a plot so complex and challenging that we’re too lazy to type it up. Short version: Someone’s trying to trick the prez into nuking the poor. Great stuff.

Liam Neeson stars as a Northern Ireland soldier who, in his youth, killed a Catholic youth in front of his little brother. James Nesbitt plays the now-adult brother, 33 years later, who is offered a chance to meet Neeson face to face for a TV program foolishly hoping for truth and reconciliation.

I LOVE LUCY: THE MOVIE AND OTHER GREAT RARITIES

In 1953, “I Love Lucy” was such a smash hit that producers quickly edited three first-season episodes together, plus connecting scenes to create a feature-length movie for theaters. It was a phenomenal flop and quickly forgotten. This DVD marks the first time it has ever appeared on TV, and, frankly, we thought it was pretty good. Also includes a number of great bonus goodies such as “Lucy Goes to Scotland” and “The Ed Wynn Show.”

IMAX: UNDER THE SEA

We usually laugh at the idea of taking larger-than-big IMAX footage and putting it on a TV. Kinda defeats the purpose, don’t it? But this one is worth the effort as the most beautiful, colorful, magical world you could imagine comes to life in your living room. Words fail us. Just go buy it.

A movie for Meryl Streep’s old-lady fans. It seems she’s divorced from Alec Baldwin, who is now married to young hottie Lake Bell. And, even though she’s dating hapless architect Steve Martin, she becomes “the other woman” by hooking up with her ex. Hmmm, apparently we are not their target audience.

Orson Welles — at one time America’s greatest moviemaker — became unemployable in the early ’60s. His ego and vision had simply outgrown the public’s ability to give a damn. In this very rare 1960 interview, Welles was not aware that his star had peaked, and he talked openly about the state of the world and the mutual natures of art, friendship, respect and admiration. It is simply one of the most electrifying interviews you will ever see. Worth seeking out.

Cohn was a sleazy homophobic politician from the McCarthy era. Smith was an artsy indie filmmaker. And they were both gay. This unique recording consists of two actors each doing a 40-minute monologue as one of the two, representing the dual nature of being homosexual — one closeted, one open, both products of their time.

Indie star vehicle for Marina Shtelen, whose main claim to fame is a recurring role as a coffeehouse waitress on “The Young and the Restless.” Here she plays a hellion teenager, held hostage by an unstable bank robber holed up in a sleazy motel. Runs that fine line between old-fashioned grindhouse and modern suspense. Deserves to be seen.

Shauna Macdonald picks up exactly where “The Descent” left off: the only survivor of a group of spelunkers, attacked and eaten alive by ravenous, blind human revenants in the dark bowels of the earth. But it seems the bat-people don’t stay underground all the time. And they have helpers in our world who keep them well fed.

Whether you’re in the mood for thought-provoking insights into the black comic characters of history, or just want to pee the couch, this is the doc for you. Thirty-six of America’s greatest entertainers discuss, scream and generally riff on everything from Stepin Fetchit to the First Black Guy On The Moon. Deftly directed by Robert Townsend.