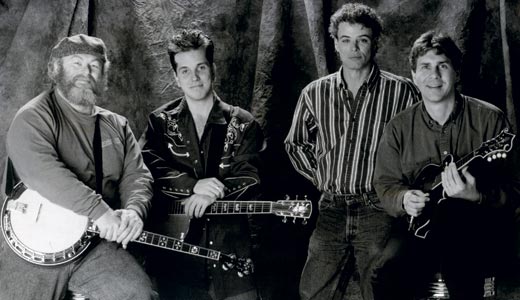 It’s not every day that tech support recognizes songs you wrote 17 years ago.

“I was having to call Mac in Portland, Ore.,” Galoots singer and guitarist Shannon Lawson said from Nashville. “I tell them my name, Shannon Lawson, and the guy on the other end asks me, ‘Do you play music?’ I said, ‘Yeah, I play music,’ and he said, ‘Did you play with a band called The Galoots?’ I swear to God, I about fell out of my chair.”

And there you have it: A Galoots reunion, brought to you by Apple.

The Galoots formed in 1993 after Lawson left his stint touring with the blues band Top Hat. He, along with Larry Raley on bass and vocals, Steve Cooley on banjo, and mandolin and violin player Mike Schroeder recorded several albums before Lawson left the group to pursue a solo career.

The band’s early Louisville shows took place at Twice Told Coffeehouse, but the group earned loyal followers throughout the region. One Galoot disciple in Knoxville, Tenn., mailed Lawson a stack of live recordings, complete with date, venue, time, set lists and names of guest musicians who sat in.

In 2000, Lawson went solo and moved to Nashville, signing to MCA and releasing a country album, Chase The Sun. Now independent, Lawson does more publishing work and is a member of MuzikMafia. Raley, Cooley and Schroeder continue to perform as the bluegrass outfit Hog Operation. Schroeder founded the Louisville Mandolin Orchestra, and Cooley and Raley still play and record with some regularity with various local artists.

The Monkey Wrench has hosted several of Lawson’s solo shows, and owner Dennie Humphrey has wanted a Galoots reunion for years. The two met in 1994, when Lawson passed through the Baker Street Café in Bowling Green on the band’s way to Nashville looking for a gig, and have been friends ever since.

All The Galoots’ releases are now out of print, but Lawson said the group has talked about making a new record and having more shows.

“I think there’s gonna be some more shows in the future, absolutely,” Lawson said. As far as a new album, “Studio time can kill you. If people are interested in it, and we have a good outcome, then we’ll push for it a little faster.”