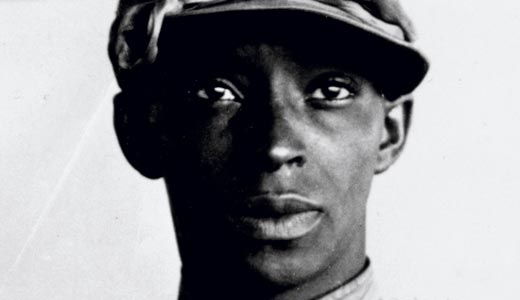 Despite the sentiments of the Tea Party protesters in downtown last week, Louisville does not have much in common with Czarist Russia. But the last African-American jockey to win the Kentucky Derby was one link between the two places. James Winkfield won back-to-back Derbies in 1901 and 1902, but declining purses due to an anti-gambling movement in America sent him to Europe where he raced in Poland and Russia for Czar Nicholas II. After the Czar was dethroned by the Bolshevik Revolution, Winkfield headed to Paris. However, he was forced to leave Europe altogether by World War II.

Winkfield’s return to 1950s America is the subject of “Jockey Jim,” a new play that premieres this weekend at Actors Theatre. “It’s the story of a championship athlete overcoming a reversal of fortune and racial prejudice to reclaim a forgotten legacy,” says author Larry Muhammad. “Winkfield had a fabulous career spanning 10 countries and 60 years. He married a Russian heiress. But when he returned to the U.S., it was during the 1950s when black jockeys had been all but forgotten.”

Muhammad is a features writer at The Courier-Journal. He has written several plays that have been performed in Louisville and New York City, including “Booty of the Year,” a family values story set behind the scenes in professional wrestling; “Kin Under the Skin,” a one-act comedy about reparations for American slavery; and “Radio Play,” the story of a police dispatcher deluged with prank calls before being challenged to save a life. “Jockey Jim” shares with Muhammad’s past work a protagonist who is struggling against the limitations enforced on him by society and an interest in people forgotten by popular history.

“Jockey Jim” is set in South Carolina where Winkfield is a low-paid stable hand haunted by his glorious past. He is surrounded by people who do not believe in him. The white stable owner he works for thinks the former jockey is crazy. The other black stable hands mock him viciously for putting on airs. Making the situation worse is the jockey’s unhappy, white wife, a titled horsewoman from Russia who doesn’t understand the ways of the segregated South. Despite all the obstacles against him, Winkfield eventually reclaims everything he lost in a second career as a successful horse trainer.

Muhammad says he first heard about Winkfield from Nefertiti Burton, the director of his first play, “Kentucky Colonel,” a show about Frank Stanley Sr., publisher of the African-American newspaper the Louisville Defender. After learning about Winkfield, Muhammad read an essay about the jockey from Mark Coomes, a former C-J writer. Winkfield also is the subject of “Wink: Incredible Life and Epic Journey of Jimmy Winkfield,” a biography by Edward Hotaling.

Winkfield returned to Louisville in 1960 to celebrate the 60-year anniversary of his historic Derby wins. He died in 1974 and was inducted into the National Museum of Racing and Hall of Fame in 2004. This weekend, Actors Theatre gives the bluegrass state one more opportunity to honor a jockey who did not get all the respect he deserved during his lifetime.