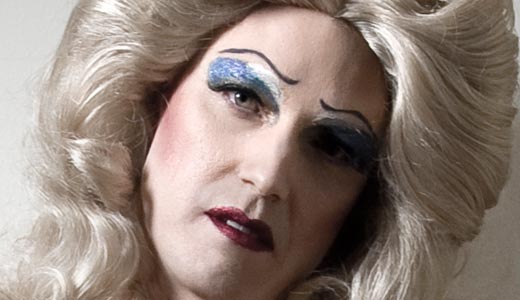 Hedwig and the Angry Inch
A production by Art Sanctuary at The Alley Theater. Directed by Mike Brooks. Continues through May 22 at The Pointe, 1205 E. Washington St. For tickets or more information, call 713-6178 or visit www.thealleytheater.org.

As life goes on and the world grows more cramped, it seems all of us bumbling around this planet have much more in common with each other than we ever thought. And that’s definitely the case here:

John Cameron Mitchell’s “Hedwig and the Angry Inch,” with music and lyrics by Stephen Trask, is a rock musical about the transgender lead singer of a rock band. Hedwig grew up as a “slip of a girlyboy” in East Germany, obsessed with rock ’n’ roll. When the opportunity came to escape to America, she took it — but she had to leave a part of herself behind in the process. She suffered through a botched sex operation to become female and legally marry an American soldier … and was left with “the angry inch.” The story of the protagonist is anything but universal, but it’s Hedwig’s quest for wholeness that everyone can relate to.

The fact that this show has been produced in hundreds of stage productions is not simply because of the bizarre storyline, but because the work itself (the script and music) is excellent. And all the elements come together in this production thanks to director Mike Brooks. Because of his solid direction, this undertaking does not rest on the laurels of a quirky, innovative story, but fully delves into the universality of Hedwig’s struggle. Brooks never settles for the obvious, which is why this “Hedwig” goes so much deeper than just a fun rock musical.

Scott Anthony is astounding as Hedwig. Throughout the course of the show — a continuous monologue that takes place in one concert — the audience has the opportunity to watch a struggling rock star emotionally stripped down as Hedwig searches for and discovers herself. Anthony’s voice is both strong and delicate. He energetically bounds across the stage at one moment, appearing frail the next. His Hedwig is not in search of pity, and Anthony, thankfully, never condescends to the character he’s playing.

Though Anthony is the star of the show, Rachel Hagan as Yitzhak is just as strong, both vocally and when it comes to acting. Larry Bourne, Rob Edwards, Matt Scobee and Rick Vester make up the rest of the cast and the band The Angry Inch — you can tell these guys know how to rock.

Rachel French’s costumes incorporate an array of textures and colors without upstaging the performance. They capture the arc of Hedwig’s story, finally becoming over the top just before Hedwig’s complete collapse.

Sure, “Hedwig and the Angry Inch” might not be your typical musical, but don’t let the fact that Hedwig’s story is so different from your own deter you from this tremendous show. You will most likely leave realizing that you relate to the transgender rock singer from East Germany, that she’s going through what we all spend our lives going through — a search for wholeness.