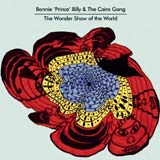 If Bonnie “Prince” Billy met up with, say, Andrew Lloyd Weber or Diane Warren, then the universe might cease, in one of those “matter vs. anti-matter” doomsday scenarios. That’s how totally unlike the industrialists of ear-candy hooks is our bonnie Mr. Will Oldham. He just won’t exploit musical gifts. Delicious moments are scattered in his latest, but they drop into earshot in a pace and procession that’s beautifully unforced. The lyrics excel at let-it-all-hang-out impressionism (“Troublesome Houses,” “The Sounds Are Always Begging”). Many highlights here result from Oldham’s stark voice and acoustic guitar entwining with less-folk-like contributions from Emmett Kelly and Shahzad Ismaily. Though attributed to a “gang,” this set’s like a solo record, most tracks evoking a singular style that’s eventually challenged and bolstered. It’s very effective on closer “Kids,” which pulls the rug right out under you and leaves you wanting more. Come to think of it, that’s an effective way to exploit one’s musical gifts. Ah, Will — you sneaky sumbitch.