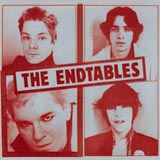 I thought we were modern, sings Steve Rigot at the beginning of “Trick or Treat” by the Endtables, a perfect statement on life in Louisville circa 1979. Arguably the first punk band in town, their music utterly reflects the anxiety of growing up “punk,” modern, in a thoroughly unmodern place. Songs such as “They’re Guilty,” “The Defectors” and “White Glove Test” exude a nervous energy that’s hard to match. But after self-releasing one four-song single, the band broke up, with their music known to only a handful. This long-overdue collection corrects the historical record by presenting the six songs they recorded while active (on the new 12-inch EP), along with an unedited take of “Process of Elimination,” as well as six live songs — five of which were never recorded, and three video clips of the band in action (on the CD only).