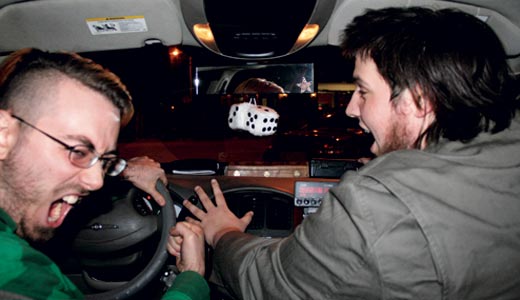 I’m going straight to the findings first: Louisville, take a bow. No really, you’ve earned it. You are by far the weirdest, lovable drunks I’ve encountered in my time on this planet thus far (excluding a few vacation spots).

Now, let’s start at the beginning. My mission: Observe the late-night Louisvillian in his natural habitat (i.e. the cab on the way back from the bar). That mission may seem fairly straightforward in print, but damn, I was pretty weirded out standing on the corner of Sixth and Park waiting for my bright yellow mystery cab to arrive …

I end up in a van-cab — Cab 420 as a matter of fact. It had a large, friendly bearded hippie type at the wheel in a T-shirt and sandals. I’m pretty sure I went to high school with him and his name is Alex, but he assures me as I get into the passenger seat that his name is Herman and that he is too old to have gone to school with me. I don’t quite believe him, but I can’t check his cabbie license, because it’s caught in the glare of the overhead light.

By the time the cab is in motion, I have already learned Louisville Nightlife Rule No. 1: “There are two people you don’t mess with,” Herman says to the windshield in front of him, “cab drivers and garbage men, because they know where you live.” I laugh nervously. “There was this one guy I picked up, had a bad Jersey accent and kept asking me where he should go to get some broads. He just wouldn’t let it go. So I dropped him off at a gay bar.”

First stop is the Baxter Avenue bar strip. It’s the usual madness — drunk, late-20s white-collars crossing the street. We pull up in front of Flanagan’s waiting for any well-dressed drunk to stumble up to us for a ride, but there are too many other cabs around. Finally, some girls approach. They want to know how much extra it is for a van-cab. I tell them it doesn’t cost extra (even though I’m not sure if that’s true), and they stumble closer until they notice it’s both me and Herman in the cab. They get sketched out and turn on their high heels to find another cab. Apart, I know both Herman and I look like perfectly presentable gentleman, but apparently together we somehow make a menacing pair. Creepy comes to mind.

This brings us to Louisville Nightlife Rule No. 2: Be wary of strange cabs. Run from them. Get yourself a regular cabbie.

Herman is eager to find something interesting for me. “Here, let’s go up the street. You need to meet my buddy Dan. He’s Australian.” Which I take to mean “badass.”

We pull up to O’Shea’s where Dan’s cab is waiting. People are arguing with the door guy and smoothing out crinkled bills. The door guy is wearing one of those sheer, black faux-turtlenecks. Dan steps out of the cab in front of us and scares the shit out of me. He looks like a piranha with abs. Australian cabbies don’t mess around.

After some wisecracks from Dan, we get a call for a pickup from Headliners. It ends up being some out-of-towners — three party chicks in leggings and heels from Chicago. They’re drunk enough not to ask why the hell I’m sitting in the passenger seat.

“What does rockabilly mean to you?” the blonde asks. I realize she still has a drink in her hand. Can they do that in Chicago cabs?

I’m craning my neck to look at her while I talk. “I don’t know, like some ex-punk-looking guy with neck tattoos and a slicked back pompadour, playing fast country music or Johnny Cash.”

“That’s what I said!” screams the brunette in a denim skirt. She’s the only one wearing something besides leggings.

“Yeah, and I said you were right,” the blonde says flipping her hair away from Denim Skirt Girl. “The problem is, that was not what was playing in there tonight.”

Denim Skirt laughs. “Nope. Some fucking old guy with a band that looked like they were about to keel over and die. Rockabilly is not the same in Kentucky.”

I let it stand.

“So, what are you doing in here? Are you like his buddy or something?”

I flounder. “Uh, I can start the meter.”

They laugh. I look back and decide the blonde is drinking water. It’s probably just her that smells like booze.

“Why are you really in here?”

Herman glances in the rearview mirror. “He’s studying for a part in a movie.”

They nod immediately as if this is totally normal. They’re sold on it just like that.

They find nothing odd about this.

I can’t help it. “Yeah, it’s gonna be a pretty straight remake, except for that ‘You talkin’ to me?’ scene. It’s gonna be me, like this …” I pull my lazy, flopped-over Mohawk up with my hands, “… and I’ve got to be completely naked for it, like tucked back and holding a banana.”

Herman chimes in: “Yeah, Apatow’s sold out. He’s getting all arty now. Shooting the whole thing in like Hi-8 (video) with midgets or something. Except this guy.”

He slaps me on the back. I’m starting to really like Herman.

The girls ask if I know Judd. I kinda nod like I shouldn’t talk about it. They drop it, as though I’m a famous actor who’s being bothered. We drop them off in some shady part of Brownsboro Road, and they hand me money. I hand it off to Herman and watch them stumble off to what I assume is their destination. There’s one guy on the porch filling a cup from a keg. No signs of a party inside.

“A $2 tip. Alright, this is another thing right here,” this is, of course, Louisville Nightlife Rule No. 3: “$5 is a good tip for a cabbie, no matter how much your ride costs. Just tip $5. Simple as that.”

We get a call to pick up some people at Fourth Street Live. When we stop at a gas station beforehand, I decide it’s a good idea to go all out and embrace the lifestyle. I buy some energy pills. Some people call them “trucker speed,” but as the guy at the station noted: “I don’t know why they call ’em that. Trucker speed is just speed.”

We get to our very own Kentucky-fried Cirque du Soleil and find our customers: a very drunk and very fancy couple. I start to feel really weird when they get in. Don’t trust pills from a gas station.

Neither of them mention me, they instead take advantage of the taxi-van’s bench seats to make out not 1 foot away from Herman and me. We’re invisible to them. I wonder if this is how rich people treat butlers.

I see them start to tilt horizontally out of the corner of my eye, and the stupid energy pills start to kick in. I have to pee — really, really badly. We’re passing right by my apartment anyway, so I tell Herman I need a breather and to pick me up on his way back downtown. He swings over and lets me out, says he’ll give me a call. I’m a little woozy standing by the cab door, and to top it off, Dave Matthews Band comes on the radio. Herman reaches to change the channel, but from the male passenger comes, “Hell yeah! Dave Matthews — turn it up!”

This is the first thing he has said.

I realize through the haze that I have made the right decision. I salute Herman and head toward my apartment building thinking about all the crazy shit cabbies have to put up with and wonder how they keep doing it. It’s not a public service. These are real people with repeat customers who rely on them. Herman’s a commendable guy in my book. A decent human being.

By the time I’m in my apartment, I have a buzz on my phone. It’s a text from Herman.

“How do you get bodily fluids out of upholstery?”

I gag and sit down.

I get two more buzzes from Herman. The first: “NM, don’t answer that. You probably don’t want to get back in here. Not tonight.”

Which brings me to Louisville Nightlife Rule No. 4: Don’t worry. With enough willpower and $75, you can clean anything off the inside of a cab.