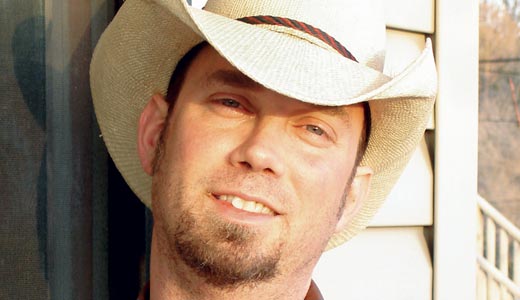 Johnny Berry performed at the Grand Ole Opry and with Doyle Lawson before striking out on his own.

“The subtitle ought to be ‘Mint Julep Without the Sugar,’” Johnny Berry says of his latest contribution to honky-tonk and country, Bourbon, Spearmint & Ice, out this Saturday. The songs are “either about whisky, Kentucky, love found or love lost.”

Staring out at Gerstle’s, a frequent haunt of Berry’s for several years, the Grand Ole Opry alum is excited about Bourbon’s brevity. “Most songs clock in at 2:20-2:30. It’s a short carnival ride.”

It just took time to get there. Berry, who grew up in Meade County listening to his mother sing, used to distract bouncers at the Opry so he could sneak backstage to hang with Minnie Pearl, Roy Acuff and other bona-fide country stars of the era. “These were old-school folks, the ones who talked about killing rabbits with banjos.”

At 19, Berry landed a job in the Opry show called Country Music USA, his first brush with live show professionalism. “You learn how to do the same thing 200 times, even when you don’t want to.”

Though he had grown up playing piano and guitar, Berry wouldn’t cut his teeth or start writing his own material until he joined award-winning mandolin player/avid golfer Doyle Lawson’s band as bassist and backup singer. Lawson ran a tight ship. “He scared me into playing right,” he says, “but when you’re young, you need someone like that around you.”

Berry moved on to work as a radio jock for 94.3-FM WULF, a commercial country radio station in Hardinsburg, Ky. He didn’t hear anyone playing honky-tonk and didn’t give much thought to forming a honky-tonk band until his wife, Elizabeth, suggested it.

While writing and recording Bourbon, Berry developed another passion: academics. He enrolled in Jefferson Community Technical College where he’s studying geography, has a 4.0 grade-point average and will transfer to University of Louisville next spring for his bachelor’s degree.

Having devoured calculus, Berry discusses concepts like the friction of distance and why the term hillbilly doesn’t just apply to the rural South — “a hillbilly is a hillbilly everywhere in the world” — as easily as he does Nashville charts. He draws deep connections between math and music. “Were they invented or discovered?” he says. “Or was it both?”

On Saturday, books and theorems will stay on the shelf. Berry and his backing band — Steve Cooley on guitar, Andy Brown on drums and Chris Douglas on bass — are out to make people dance. “Honky-tonk is not a sit-down atmosphere.”