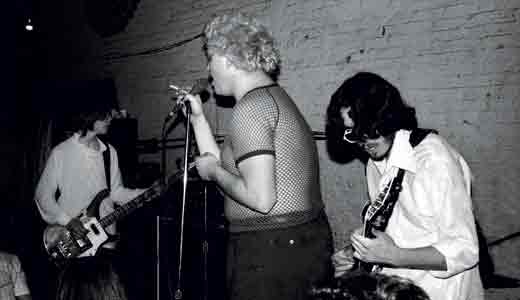 Louisville is a place where you have to make your own fun.

I moved here in 1981, and the first memory I treasure is spying the words “NO FUN” spray-painted across the orange and blue panels of a grimy, downtown sex arcade called the Camera’s Eye.

By then, I knew “No Fun” was the name of a Stooges song, because the Sex Pistols did a cover of it, but I had yet to hear the Stooges and had yet to learn it was also the name of Louisville’s first punk band, already ancient history in those years of fire.

A wealth of unbelievably great bands followed No Fun through the burning fields, but the secret weapon of the Louisville scene has got to be first-wave iconoclast heroes the Endtables.

Steve Rigot is a flamboyant giant from the shores of Southern Indiana who reinvented himself as a Warhol Factory superstar. He formed the Endtables in 1978 after witnessing an early Louisville punk show. Originally an unwieldy coalition of eight or more (reports vary), the Endtables soon contracted to the rock-hard core of Rigot and guitarist Alex Durig, a Swiss-Columbian chess prodigy and master of the amplified freakout.

Rigot in performance cut an awesome and charismatic figure. In the video footage — shot by local documentarian Jeff Jobson in October 1979 at the old Louisville School of Art — Rigot writhes on the checkered floor, the rip in his shirt growing larger, until the shirt hangs like a torn standard from his massive shoulders. Like Scarlett O’Hara wrapped in her green velvet curtain, Rigot fashioned his own glamorous reality from what was available to him in the blasted cultural landscape of 1970s Kentucky. Gold spray paint, Ace bandages and duct tape became a wardrobe.

In September 1979, the band — now featuring Steven Jan Humphrey on drums and Alex’s 15-year-old brother Albert on bass — recorded six songs at Jeff Carpenter’s Real-to-Reel studio. Four of the songs were released as a 7-inch EP on the band’s own Tuesday Records.

Promotion for the record consisted of Rigot taxiing to the Manhattan offices of Interview magazine, passing Andy Warhol in the corridor, and leaving a copy for music editor Glenn O’Brien, who ignored it.

But Warhol is dead and the joke is on O’Brien. The record rules, and it’s become an undisputed classic of the American underground, coveted by collectors and fans around the world. A copy sold recently for more than $1,000 on eBay.

If I were to choose one thing to place in the cornerstone of the looming downtown arena, one object to represent Louisville for the ages, it would be this record. Alex Durig’s crazed guitar riffs pile up against Rigot’s fantastic, cryptic lyrics until they spill in thrilling squalls of sound. It’s pure American weirdness, as jaw-dropping today as the day it was recorded. In other words, it’s timeless.

The Endtables called it a day in the spring of 1980. Their two remaining studio recordings — “White Glove Test” and “Trick or Treat” — circulated like secret gospels on disintegrating cassette tapes for a decade, until Kinghorse bassist and bluegrass impresario Mike Bucayu stepped up and released them as a single on his Self Destruct label in 1991. It quickly disappeared from local stores.

Now the secret is revealed and a star restored.