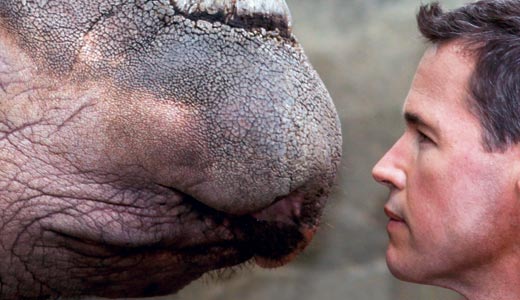 Just who has the best Julep in this jurisdiction? LEO Weekly’s Bar Belle (me, writing in third-person) has been tapped as one of the judges for the 7th annual Rose Julep Recipe Contest on Thursday at Sully’s. Sponsored by Four Roses bourbon, the contest invites the top bartenders from Louisville’s bars and restaurants to present their version of the popular Derbytime drink. Last year’s winner was the Spiced Apple Mint Julep by Rory McCollister of Varanese. The public is invited to eat, drink and watch as the panel of judges sip through the competition and crown a winner. There will be specials on Four Roses as well as a door prize of two tickets aboard this year’s Great Steamboat Race. —Sara Havens

‘There Is No Improv, Only Zuul’

What made Bill Murray’s performance in “Ghostbusters” especially brilliant was the fact that so much of it was improvised. Stefan Gearhart and Parker Bowles, co-founders of the new improv troupe Damaged Goods, formed their friendship through the film and share a passion for unscripted comedy. “Improv for us is like therapy on stage,” explains Gearhart. “We get to deal with our problems and everyday annoyances on stage. We are essentially damaged goods.”

This week’s show, which is part of the Alley Theatre’s Thursday improv series, will include short-form improv games — some familiar and some Damaged Goods originals — as well as a few surprises and, as always, audience involvement. —Jane Mattingly

Equal parts Ramones and flower power, Atlanta four-piece Black Lips are looking to the spirit world for its upcoming full-length. In a recent New Musical Express interview, Lip Cole Alexander said the band plans to use a human skull bought on the black market in New York as an echo chamber for their follow-up to last year’s 200 Million Thousand. Not quite Scandinavian gore, but it’s close. They’re carousing with Box Elders, a 5-year-old band from Omaha, Neb., named after the bugs that infested the childhood home of members Clayton and Jeremiah McIntyre. Yeah, that’s kinda gross. Midnite Sons, featuring Joey Mudd (ex-Crain), also open. —Mat Herron

This is the kind of thing you look out for and then smack yourself in the head for missing when you see the loads of cool stuff your friends walked away with for dirt cheap. The U of L Honors Student Council has collected more than 30,000 items (yes, I meant every one of those zeroes) including a large amount of vinyl (making up a third of the total), CDs, books and DVDs that will be on sale for $2 or less. The entire event was organized as a fundraiser to benefit Kosair’s NICU. They hope to raise at least $5,000, which will be enough to buy one pod for a prematurely born infant. So go forth, find cool, quirky and interesting swag, and help save a tiny kid’s life in the process. This kind of opportunity does not come along too often. Oh, and on Sunday, everything goes half price. —Pawl Schwartz

His exploits are etched in punk lore. Greg Ginn, the former Black Flag guitarist and founder of SST Records, who took many of his instrumental cues from un-punk sources like The Grateful Dead, continues his laser-like focus on music’s more improvisational aspects, reaching well beyond his hardcore roots with new outfit The Taylor Texas Corrugators.

Maybe you’ve been curious about Puccini. And after a long winter of basketball and health care debate, a little Italian opera might be just the tonic you need to fling into spring. Saturday and Sunday at the Brown Theater, U of L’s School of Music’s Opera Theater presents a pair of one-act operas by the Italian operatic master. This isn’t the hard stuff with Valkyries and stern Norse gods, it’s the opera of Giacomo Puccini, with comedic turns and poignant love songs. “Puccini is known for his great music,” says co-director Mike Ramach. “Suor Angelica” has beautiful melodies, and one of opera’s most popular arias, “O mio babbino caro,” is in “Gianni Schicchi.” Two casts sing the two works from Puccini’s “Il Trittico.”

Ask your doctor if Puccini could be right for you. —Bill Doolittle

I get a little teary eyed remembering Mario’s early days. He was just little collection of pixels, making weird noises when he jumped, eating mushrooms, exploring pipes and bumping his head into all sorts of blocks to obtain goodies. Hey, video games didn’t really have to make a lot of sense in the early days. In fact, they were more mysterious and held more allure if they didn’t. It is exactly this mysterious pull that has caused Mario to come up as a figure in pop culture artwork and live on in the minds of dorky, intelligent artists like Jared Cain. Cain has hand-crafted a series of Mario-related figurines for this show, all styled in an original and quite serious manner. Ultra Pop is the perfect home for this kind of art, and this show will help you to re-live and maybe even make sense of the cult figure that Mario has become in our techno-age. —Pawl Schwartz

Saturday at School of Sharks Theater, located in Our Mother of Sorrows, Louisvillians will have their best chance to see large dancing puppets mingle with the human masses as if they belong — well, outside of a trip to Capitol Hill or Los Angeles, anyway. The Squallis Puppeteers present the “Feast of Fools – TV Dinner,” an annual fundraiser that is now in year seven. As noted, it will feature large puppets, but also a silent art auction, a scavenger hunt, a homestyle meal, cash bar ($2 wine and beer courtesy of Brown Forman and BBC) and a live puppet telethon. The art auction, which ends at 9:30, will feature the work of local artists, and the event is family friendly (assuming no one in the family is afraid of large dancing puppets). —Kevin Gibson

That Shawna Dellacave and Jason Cox of IamIs hunkered down for a good little while should only reinforce the maxim that great things arrive from patient people. The trick is whether you can hear calculation in the songs.

On Trance Inducer, it’s apparent Dellacave and Cox are critical thinkers, but they never let the process disguise their unvarnished truths. All swagger and a dash of sarcasm and humor here and there (“Fish Song”), Trance is a statement waiting to be made by the duo, and they’re in good company for their CD release: Lohio, Pittsburgh siren Emily Rodgers and The Commonwealth round out the bill. —Mat Herron

Unless you’re Sarah Palin, the thought of blowing the heads off arctic cuddly-wuddlies might be something of an alien concept to you. If you’re Richard Ellis, the concept is utterly repugnant. As part of the latest Kentucky Author Forum, Ellis will be discussing his book, “On Thin Ice: The Changing World of The Polar Bear,” with fellow guest Jeff Corwin, host of Animal Planet’s “Corwin’s Quest.” The event will kickstart with an interview moderated by The Courier-Journal and will conclude with a Q&A in which participants can ask Corwin what it’s like to be routinely molested by dangerous creatures, with a ticket-dinner to follow. For all you environmentalist cheapskates out there, WFPL will be recording the event live, and KET will air the conversation at a later date, for free. Tell ’em Palin sent you. —Jonathan Meador

The eight resident artists at Flame Run are “the usual suspects” of the title. This exhibition was organized because, as owner Brook White explains, “Everyone here has a different technique and approach to glass, and this exhibit will celebrate that variety.”

He’s right — they do have variety. It’s one of Flame Run’s strong suits. White specializes in extra large vessels with large bands of color using the incalmo technique. Susie Slabaugh uses the Swedish Graal process to give the glass a painterly feel. Murrine beads fused together in the shape of bowls are the creations of Paul Hugues. Bryan Holden combines metal with cast and blown glass to form his sculptures. Nothing usual about that. —Jo Anne Triplett

I’ve learned to say “nude” instead of “nekkid.” My word choice is certainly getting a workout with the show “Natural Splendor.” Thirteen artists are featuring the unclothed figure in a variety of media. Whether it’s as a figure study, portraiture or abstraction, the nude is here to stay. “Nudes have been an enduring force in art in every era from every culture, and will continue to have a venue and artists a platform at Kaviar Forge & Gallery,” says gallery manager Blair Arseneaux.

This is the first year for “Natural Splendor,” but they plan to make it a biennial event. The 2010 artists include Jeaneen Barnhart, Chyre Boardman, Dawn Bunch, William Duffy, Craig Kaviar, Lloyd Kelly and Gavin Wilson to name a few. —Jo Anne Triplett