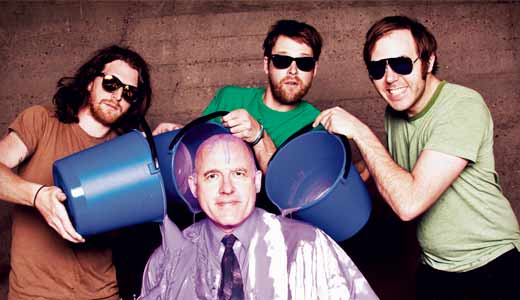 ear X-tacy and independent record stores nationwide continue to emphasize the nexus between customer and band, booking a series of in-stores leading up to Record Store Day on April 17. A Mourning Rain kicks off the free rock at 7 p.m. today. On April 15, the store’s “Vinyl in the Ville” event returns (7 p.m.). There will be an open turntable hour where you can bring your own records, all wax will be 20 percent off, and you can win a Crosley Radio turntable (mine’s been on the fritz, so I might have to enter). Friday, Animal City stop in (7 p.m.) and jam tracks from Breakfast Rider, and Thomas A. Minor & The Picket Line wraps it all up Saturday with a 2 p.m. show. —Mat Herron

The Playhouse, U of L

In 1998, a young man named Matthew Shepard was murdered in Laramie, Wyo., — a murder deemed a hate crime motivated by homophobia. This crime, and the life of this young man, inspired Moises Kaufman and the members of the Tectonic Theatre Project to create “The Laramie Project.” They conducted hundreds of interviews with residents of the town and drew from journal entries and published news reports to create the haunting story of a murder that changed hate crime legislation in the United States. The University of Louisville Department of Theatre Arts closes their 2009-2010 season with this impressive undertaking. —Laura Morton

Aroldis Chapman, the 22-year-old left-handed pitching sensation with a 100-mph fastball, is penciled in to start for the Louisville Bats Friday night against Columbus at Slugger Field — the third game of an eight-game home stand that gets under way Wednesday. Chapman was signed by the Cincinnati Reds for $33 million after defecting from the Cuban National team, and has been assigned to begin the season with AAA Louisville. Bats Manager Rick Sweet says former Cincinnati ace Mario Soto will be helping Chapman develop a change-up — a “slow” pitch at, say, 90 mph — to keep hitters off balance. (Just imagine a 90-mph change-up!) Sweet, who has enjoyed success in five years at Louisville, says this will be his youngest team — loaded with prospects. —Bill Doolittle

Jayme Stone won a Juno for his 2008 Africa to Appalachia, and that was merely the pinnacle of a long creative journey. “Early on when I started playing banjo, I discovered African music,” Stone said in an interview earlier this year. “There was a resonant quality.” He went to western Africa in 2007, staying for three months, and it was there he met kora player and griot Mansa Sissoko, developing a close friendship despite language barriers. “I want to be inside that tradition enough that, as I am being creative and allowing my various influences (including bluegrass) to be there, I have some grounding in that music,” he said. “The process has been really organic, starting with the friendship with Mansa … and trying to communicate across cultures — that’s the overarching concept.” Mansa’s cousin and fellow kora player/griot Yacouba Sissoko join Stone’s band. “It doesn’t sound African, but it doesn’t sound Western … it’s our music.” —Martin Z. Kasdan Jr.

I don’t know how funky these plays are going to get, but fresh is a word I would certainly use, and I don’t throw it around lightly, especially when it comes to any form of media. Well, I’m pretty serious about my vegetables, too. This mixed-up, weird-o collection of 10-minute plays features only local playwrights, actors and directors. Out of the nine plays, a few stand out (even camouflaged amongst the weirdness), like “Sympathy for the Techno” about a cursed disco light that turns every party into an unstoppable dancing hell by up-and-coming playwright Ben Unwin, whose plays I’ve seen before, and I’ve gotta say — they are consistently weird to the point of funny, or funny to the point of weird. The other to look forward to is “Break Water” by Sherry R. Deatrick, in which an eBay rich family moves on to a less geeky pastime: meth. There is a pay-what-you-can showing on Saturday, so really, you have no excuse not to go. —Pawl Schwartz

As the wretched economy continues to takes its toll on small businesses, one group of artists came up with an idea to swing back. The Highlands Art Studios, an art collective representing the work of eight local artists, opens this weekend. Most of the artists, including Ted Tarquinio, owned their own galleries but decided forming a collective would be more beneficial. The first reason is it gives shoppers more mediums under one roof — from watercolor paintings and equine and nature photography to portraits and oil and acrylic paintings. The other reason is money. “We all found it was a struggle to make it on our own these past two years,” says Tarquinio, who owned TLT Outdoor Photography on Barret. “So we have moved to a better location and reduced our overhead.” Check out the collective at its grand opening this weekend. —Sara Havens

It’s time to officially dust off your beer coozies, Louisville: The annual aerial-explosion orgy of wonder and merriment — aka Thunder Over Louisville — is going down Saturday, and you need to start figuring out where you’re going to camp ASAP. Fortunately, Louisville’s topography affords plenty of quality viewing spots if you don’t want to hack your way through the drunken masses swarming the waterfront, downtown and anywhere else within a 1-mile radius of the Second Street Bridge. Hull Street and Ellison Avenue are some of the best spots in the Highlands; Iroquois Park offers a commanding-but-distant, almost biblical view of the smoke and lights; virtually anywhere in the West End (particularly Portland and Shippingport) is kosher; and, of course, your living room, which offers the best spot to safely enjoy the spectacle and whatever you need to make it more interesting. —Jonathan Meador

The Louisville Ballet is throwing a Thunder party with a decidedly purple tinge. When the fireworks are finished on Saturday, Wax Fang will perform Prince’s Purple Rain in its entirety. Personally, I can’t wait to hear what they do with “Computer Blue.” The party starts at 6 p.m. with a bourbon tasting inside and food from Carrabba’s Italian Grill outside. When the sun goes down, enjoy the fireworks from the Louisville Ballet’s roost, separate from the sweaty masses of folding chairs and open containers on the Waterfront. Here’s hoping some of the dancers that will be present at the party remember the Joffrey Ballet’s Prince tribute from the early ’90s (“Billboards,” long ago available on a format known as VHS, kids, which I believe I still own). Wax Fang’s excellent La La Land is set to be reissued by Absolutely Kosher on vinyl in May, and they are recording new material as you read this. —Damien McPherson

Waterfront Wednesday returns with your best bargain opportunity for great shows with oft-diverse lineups of the highest caliber. This month’s Waterfront Park outdoor freebie starts with singer-songwriter Audra Mae and comes to a rockin’ close with Legendary Shack Shakers. In between (hitting the stage around 7:30) is the triumphant return of The Holmes Brothers. This NYC-based trio just released Feed My Soul, their second album produced by that songbird who flew her Louisville coop long ago — Joan Osborne. The Brothers’ new set continues their stone-solid blend of blues-pop dashed with humor and richly laced with gospel, but now it’s infused with a crowning shot of resilient attitude. That something extra must have surfaced during Wendell Holmes’ recent bout with cancer. The guitarist-vocalist’s musical response (including a toughened combo of “Fair Weather Friend” leading into “Put My Foot Down”) is that he knows more than ever how to live in love and faith, but he’s not going to take crap from anyone. —T.E. Lyons

It’s good to have friends. Artist/educator Bob Lockhart definitely thinks so; he asked two former students, David Caudill and Rex Lagerstrom, to accompany him at his next exhibition at PYRO Gallery. Lockhart, perhaps best known for his sculptures at the Louisville Zoo, is showing recent drawings. Caudill is well known around town for his large linear metal sculptures and will be exhibiting smaller versions. Lagerstrom, a physician by trade and an artist by design, is showing encaustics and wood engravings inspired by his interest in Eastern philosophies.

Lockhart once taught at the defunct Louisville School of Art and is now at Bellarmine University. “As a teacher,” Lockhart says, “it is a joy to see (my) students … reach a new level of vitality and excellence in their mature work.” —Jo Anne Triplett

‘The Horizon Series’ by Gretchen Papka

Viewers of Gretchen Papka’s “The Horizon Series” at B. Deemer Gallery are led into a world that doesn’t exist. The imagery in her mixed media encaustic work consists of layered maps, dictionary pages and ledger sheets covered with drawn mountainous landscapes. It creates a surreal world, gleaned from her memories combined with a hefty dose of imagination.

She describes her work as “fanciful and dreamlike … an idealized imaginary world in which (I) would like to live.” And she’s taking us on the journey with her. —Jo Anne Triplett

Big girl. Big dreams. Big hair. Big songs. Big cross-dressing John Travolta. Those are some big things that come to mind when I think of “Hairspray.” Derby Dinner couldn’t stop the beat, so they decided to join it with this production of the Broadway musical, which was based on John Waters’ 1988 film. A successful film remake came out in 2007 and starred John Travolta, Michelle Pfeiffer and … wait for it … the dreamy Zac Efron.

What sets “Hairspray” apart from the average trivial musical is its storyline, knee-deep in ’60s civil rights issues. The songs are catchy, but it’s the message that makes all the over-the-top shenanigans worth it. —Sara Havens