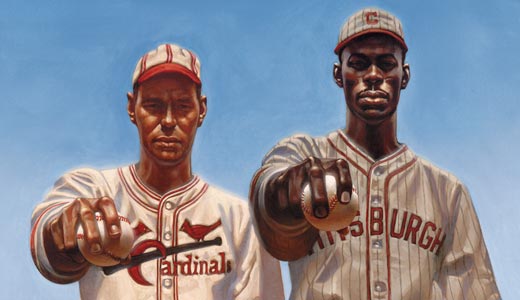 Detroit’s masters of the endless rock ’n’ roll kitsch party continue their quest for world domination. Formed in 1996 as The Wildbunch, Electric Six gained buzz early when Jack White may — or may not, stories vary — have sung backup on “Danger! High Voltage!” The U.K. recognized their potent cocktail and showered them in high chart positions — an amazing feat considering singer and primary writer Dick Valentine (aka Tyler Spencer) says, “90 percent of our songs are about absolutely nothing.” Mindlessness can’t devalue classics like “Gay Bar,” “I Invented the Night” and perhaps the greatest album title of all time: I Shall Exterminate Everything Around Me That Restricts Me from Being the Master. —Mat Herron

In the time it will take you to read this sentence, the performers of Louisville’s other improvisational comedy troupe will have made you laugh so hard that the idea of keeping a beverage handy might seem like a bad one. The five-year-old Project Improv plans on bringing “a little something-something-something” to the Alley Theater Thursday with an act that’s kid-tested and mother-approved. Fans can expect classic “routines” like Celebrity Dating Game, the 30-second Biography and the indiscernible Freeze Tag, which sounds like a cross between live-action “Mad Libs” and that scary scene in “Willy Wonka” where Gene Wilder ruins your childhood forever. —Jonathan Meador

You know you’ve arrived when your jam closes a Cadillac ad. Grammy Award-winning dance-pop group Phoenix, recently billed as one of the headliners of Lollapalooza and also slated for Bonnaroo, doesn’t seem to go anywhere but up, thanks to its critically acclaimed record, Wolfgang Amadeus Phoenix. And there’s little doubt the audience will test the limits between rows when the group takes over Thursday. Mindful of its fans, the group released an eight-song Sydney show for free, including an 11-minute version of “Love Like a Sunset.” —Mat Herron

Stick around long enough after Sevendust assaults your eardrums during an early show at Headliners, and you’ll be party to a late-night, funked-up wind-down.

Headtronics is DJ Logic, Phil Lesh keyboardist Steve Molitz and Freekbass, a seven-time Cincinnati Music Award winner. The trio came together after an impromptu jam session last summer, were christened by none other than Bootsy Collins, and from there, playing out felt only natural. “It turned out to be one of those magical musical moments,” Freekbass says, “so we decided to play some full shows together.” —Mat Herron

This year’s Oscar ceremony included a touching tribute to the late John Hughes. For many who faced adolescence in the ’80s, his films offered social guideposts and personal reassurance, always accompanied by a great soundtrack. Film journalist Susannah Gora took on the mission of fully capturing all that these movies meant for a now-legendary loose association of young American actors and their acne-dreading audience. Her new book, “You Couldn’t Ignore Me if You Tried: The Brat Pack, John Hughes, and Their Impact on a Generation,” is a wide-open blend of cultural assessment, close-up introduction to what it took to make these movies, and detailed dish for enthusiastic fans of the talents and the now-iconic characters. Carmichael’s is hosting the author for a reading/signing; no word on whether there’ll be a boombox playing “In Your Eyes.” But maybe it can be found on a jukebox nearby, and a toast raised to the teenager’s best friend in cinema history. —T.E. Lyons

After graduating from the Youth Performing Arts School in 2009, Christopher Hancock started the Apex Theatre Company. And usually when one begins a theater company, they start small — a little production to get its feet wet, performing in a lesser-known venue. Well, that’s not the case here. Not only are they performing in Actors Theatre’s Victor Jory, Hancock has chosen the premiere production to be John Patrick Shanley’s “Doubt” — you know, one of those little-known Tony Award and Pulitzer Prize-winning plays. Theater is all about taking risks, and clearly this young man and his company aren’t afraid of a challenge. —Laura Morton

Hedwig and the Angry Inch

Mix three parts rock opera, two and a half parts glam, and one botched sex change (that forms the namesake), and you’ve got the basic idea of this delightfully profane musical. Any live performance of this cult work (premiered in 1998) is a massive excuse to go all out with costume design and staging. The talent ranges from Scott Anthony, who starred as Ash in the Alley Theater’s recent sold-out run of “Evil Dead: The Musical,” to our homegrown Venomiss designs run by Rachel French, who has gone balls to the wall for this one. Not only can you expect to see double the costume changes (vs. the traditional “Angry Inch” set up), but also expect Venomiss’ vomit-in-the-back-of-your-throat approach to delightfully twisted clothing design. Thanks to the freedom-in-weirdness “Hedwig” encourages, you’ll see some of the best and most outlandish acting, sets and staging this side of the Ohio. —Pawl Schwartz

Last year, it was 1,000 hot dogs. So how do you top that? Move on to bigger and badder hunks of meat, I suppose — which is exactly what the crazy folks at Mr. G’s, a Middletown bar, and The Wizdom Foundation decided to do this year for their annual fundraiser. A few dozen “lucky” people will attempt to eat 1,000 Blazin Buffalo Wild Wings’ boneless chicken wings in less than three hours. The party takes place out front of Mr. G’s in the Stone Field Square shopping center and also will include a silent auction, live music by Andrea Davidson and others, cornhole, adult beverages, food and other such festivities. All proceeds go to The James Graham Brown Cancer Center. —Sara Havens

Thunder is over, and Derby is rounding the corner. This can only mean it’s time for the Cherokee Triangle Art Fair, now in its 39th year, to fill the void. Some go to buy, some go to people-watch, most go to drink beer while leisurely strolling through the many aisles of art in this historic, quaint neighborhood. More than 400 local and national artists competed for the 220 spots available. As usual, there will be food, drinks, live entertainment and more to keep the crowd happy and entertained.

There’ll be a preview party Friday night hosted by the Legal Aid Society, called “Brush, Bottle, and Barrel of the Bluegrass,” at Louisville Collegiate School, 2427 Glenmary Ave. Tickets are $75 and can be purchased at the door, or in advance by calling 584-1254. —Sara Havens

The names are as terrific as the players themselves, with Josh Gibson, Buck Leonard, Kitty Kat Mays, Cool Papa Bell — and Satchel Paige, the long-armed name of names in Negro League baseball. Paige was well known to whites, too, who had an idea something was buzzing with team names as fine as the Kansas City Monarchs, the Baltimore Elite Giants and the Birmingham Black Barons. Something buzzing like Paige’s “bee ball,” which the hurler said buzzed on its way to the plate, then all of a sudden would “be there.” A unique show featuring the work and exhibits of author Kadir Nelson opens Sunday and runs through September at the Louisville Slugger Museum. Nelson is the author of the award-winning book “We Are the Ship: The Story of Negro League Baseball.” Sounds like fun for any fan. —Bill Doolittle

“Photography provides for me an avenue to document what I see, experience and wish to share,” says artist Ernestine Hall. “The images … are from a series of doors and windows that are continuous subjects in my photography and other art media. Producing work in a thematic series enables me to see commonalities and differences. The source of most subject matter comes from (my) world travel. My goal is to show the realism of everyday life of a people, their culture and community.”

Wayside Expressions Gallery has chosen Hall’s work to celebrate their fifth anniversary. They are also celebrating the move to their new location on West Broadway (gallery hours are limited: 11 a.m.-1:30 p.m. Monday-Friday, but the art can be viewed by appointment). —Jo Anne Triplett

4838 Brownsboro Road in the Arcade

We are blessed in Louisville with many parks designed by Frederick Law Olmsted and his firm. The Plein Air Painters of Kentucky, a group that paints outdoors, know that’s a good thing for them, so they headed to the parks. The results are on display at the Jane Morgan Studio & Gallery.

The Plein Air Painters of Kentucky also have given back to the landscape they love so much, donating a portion of the sale of their paintings to the Olmsted Conversancy. They gave the money to the conservancy as a fundraiser to help them, “as they are trying to revitalize some of the … parks that are in dire need of repair,” says gallery owner Jane Morgan. “I don’t think many people realize what jewels we have here.” —Jo Anne Triplett