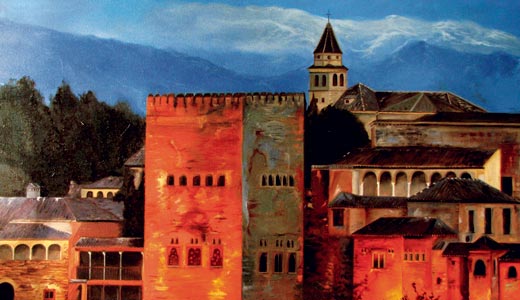 James McMurtry is the kind of singer-songwriter whose life inspires movies like “Walk the Line” and “Coal Miner’s Daughter.” His astute observations on the human condition influence enigmatic characters like Bad Blake in last year’s Oscar winner “Crazy Heart.” After 10 years, eight studio albums and two live records, McMurtry’s legacy is etched forever in the annals of Americana. You’ll hear why when he performs as part of Kentucky Derby Festival’s concert series tonight. Born and raised in Texas and the son of novelist Larry McMurtry, James has an arsenal of songs at his disposal that employ graceful language, bleak narratives and rich characters to paint a distinguished picture of America. Will Hoge joins. No coolers, cans, bottles or pets. —Brent Owen

Take whatever you think you know about the Sept. 11, 2001, terrorist attacks and quietly put it on a shelf — David Ray Griffin is in town. Griffin, a two-time Nobel Peace Prize nominee and author of nearly 40 nonfiction books, will give a lecture challenging the memes and accepted truths borne from America’s bad day, 9/11, specifically addressing concerns about the U.S. military’s invasion of the sovereign nation of Afghanistan, which you have to admit felt good, but in retrospect, doesn’t make much sense. If you can get past some of Griffin’s more conspiratorial stylings, his lecture should prove eye opening, to say the least. —Jonathan Meador

Paul Strickland is one of the most in-demand comics on the circuit today. The Nashville native, who now lives in Louisville, will be doing a rare run of local performances this weekend at Comedy Caravan. His special brand of humor isn’t filled with the usual punch lines or quirky observations — but draws from his personal experiences in a more narrative style of comedy. Just wait until you hear what exactly happened to him in Balbknob, Ark. His distinctive sense of humor also is featured in “A Brighter Shade of Blue,” a one-man show he hopes to perform in Louisville before taking it to national comedy festivals across the country this summer. Check out www.leoweekly.com for our full interview with Strickland. —Brent Owen

Whiskey inspires people to do many things, and writing poetry is one of them. Singing karaoke, peeing in public and hitting on bartenders are others, but we’ll leave those for another time. Kentuckian Tommy Gaffney is returning home Thursday for a reading and signing of “Whiskey Days,” a collection of poetry. Gaffney now resides in Portland, Ore., and “Whiskey Days” is a follow-up to his first release, “Three Beers from Oblivion.” The poems bridge the distance between his old roots in Kentucky and his new home in hipster-heaven Portland.

In a week marked by excess, fashion and competition, it’s probably wise to keep larger injustices in mind: Suffering, poverty and discrimination are foes that Amnesty International’s Demand Dignity Campaign seeks to wrestle to the ground. For the fourth straight year, the students in Amnesty’s chapter at DuPont Manual High School will collect donations for the campaign while filling your gullet with local fare. Piano wiz Harry Pickens, folkie John Gage and high school bands Beady, The Great Scots, The Augmented Five and Matt Clemons are the night’s earworms. —Mat Herron

He’s back. Once again, on the eve of Derby weekend, the King of the Country-Western Troubadours takes over Jim Porter’s and turns it into his own personal honky-tonk hell on earth. Did you know this guy used to be a circus freak/carnival barker? He also wrote most of his chart-topping hits in prison, won’t drink anything but party liquor and makes lightning come out of a guitar when he sets his mind to picking one. Seriously, even Chuck Norris is scared of this guy. But when Unknown (who also provides the voice for Early Cuyler on the animated show “Squidbillies”) serenades women with the sweet strains of “Stalking the Wild She-Beast” and “Undead Blues,” they’ll know they’ve been got. And your lady might just be one of them. Dallas Alice opens (assuming the King gives them permission to do so). —Kevin Gibson

‘Women of the Alhambra’

The Alhambra is a palace in Granada, Spain, that was built in the mid-14th century by Moorish rulers. It is now one of Spain’s major tourist attractions and acts as a museum of Islamic architecture. Artist, dancer and gallery owner Graciela Perrone was inspired by the Alhambra and wanted to paint a series that depicted the women of the ancient palace, including flamenco dancers Brenna O’Hara and Juliana Bravo.

“I have been working on a project for more than two years and decided to paint part of it,” Perrone says. “I present some of the characters of the story in this exhibit, painting visions I never painted before.”

When someone says Butchertown and the first thing you think of is “it smells,” then you definitely need to read Edna Kubala’s new book “Louisville’s Butchertown,” a work inspired by this unique corner of Louisville.

“During the 1960s, Butchertown was a blighted neighborhood with a small group of residents fighting to keep houses from being demolished.” Kubala says. “It’s a neighborhood that has an extremely diverse socioeconomic group of people in it. Now, as a result of those dedicated people, it’s a vibrant neighborhood, is on the National Register of Historic Places, and has a book about it.”

You can buy “Louisville’s Butchertown” at Kaviar Gallery, plus get the book signed during the F.A.T. Friday “Derby Hop.” —Jo Anne Triplett

Corner of Main and Campbell

New York-based producer/DJ/label owner Luca Venezia, aka Drop The Lime, is a leading authority on the bass-music scene. He incorporates elements of dub, drum ‘n’ bass and techno into original compositions he tops off with live singing. Raised on the early rock ‘n’ roll of Chet Atkins and Roy Orbison, the 23-year-old Sicilian fell for dance beats after going to his first rave. He took his name from an old proverb: If you pick up a lime and it stays green, you will have good fortune. Noise Floor Crew from Chicago also perform, as do locals Modest Haus, Lady Carol and OK Deejays. —Mat Herron

Down & Derby brings a whole new meaning to the lyrics of our state song: The sun shines bright in My Old Kentucky Home, ‘Tis summer, the people are gay. We’re talking drag queens: Meet Victoria “Porkchop” Parker, who got her start at The Connection and went on to appear on “RuPaul’s Drag Race.” We’re talking about getting served: The Derby City Roller Girls put the “tail” in cocktail waitress. And, of course, there will be dancing. Los Angeles’ The Perry Twins will be sure to get you shakin’ your booty on the dance floor. And the best part is, all proceeds go to the WINGS Clinic and The Louisville AIDS Walk, both of which benefit individuals in our community with HIV/AIDS. The party is open to everyone who wishes to attend, but, just so you know, it’s gonna be real gay. —Pam Swisher

The music programs of several Louisville-area Catholic high schools will perform Sunday to raise money for Catholic Relief Services, specifically benefiting earthquake relief efforts in Haiti. The concert will be held at St. Patrick Catholic Church in east Louisville and is a first of its kind collaboration between the schools’ music programs and global issues clubs — 100 percent of the proceeds will be donated. Schools involved are Assumption, Mercy, Presentation, Trinity and St. Xavier, with an appearance by the Bellarmine University Choir.

The evening will include choruses, choirs and drum corps, with seven different groups performing individually. Each of the groups then will take the stage for a joint performance of Mozart’s “Laudate Dominum” and “We Shall Overcome.” Admission is a donation of your choice at the door, so don’t be stingy. —Kevin Gibson

“Revealing the Geography” is Reid Norris’ exhibition of oil and watercolor paintings in Mellwood’s new gallery, Gallery M. He specializes in works that combine Midwestern stories with Indian mythologies.

“The narrative of the Midwest, particularly in my lifetime, is one of disenchantment and decline, of stagnant industry, of leaving and losing,” Norris says. “On the contrary, Indian art is overwhelmed with the divine; Brahman, which is not often overtly represented but instead is channeled into knowable forms, personified by the gods and their regular interaction with everyday life. The question I am posing about the Midwest is, ‘What are the knowable forms of our gods?’” —Jo Anne Triplett