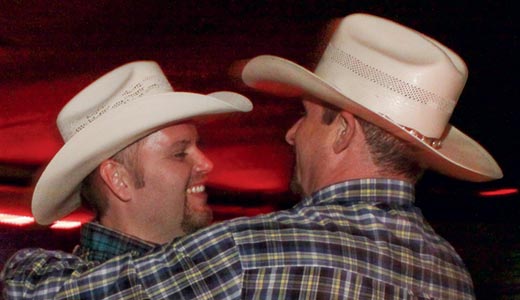 Country music, a rather specific genre thematically, seems to bring together quite an eclectic audience, at least across Kentucky. It used to be men like Hank Williams, who had been taught to bottle up their emotions until they died of alcoholism or nerve problems, could only say how they really felt in a song. Their audiences were primarily white, middle- to lower-class men and women. Now, in a far more confusing and far less graceful age, we all are trying to figure out how we feel about ourselves, each other and the world around us — which seems to get colder every year despite global warming. We are trying to find the words to explain the secrets of our hearts. And country music does just that. It speaks to the lover who has been deceived, the worker who has lost his job, the alcoholic who has lost everything, and the agnostic who may have just found proof of God’s existence.

The first diehard fan of country I encountered in my research moved lithely and gracefully across the hardwood dance floor in the back room of Starbase Q. I remember thinking that her dancing must’ve been rooted in ballet; she would almost pirouette between stomps and claps. When I interviewed the line dancer who seemed to have made the hillbilly tradition her own, she was so touchingly open about her history and passions, I forgot many of my questions. “When they had it at Connections, we used to go there all the time,” said Lenette Vetter, her peroxide blonde hair spiked up, donning a blue Keith Urban T-shirt. Lenette has been dancing since she was 3, beginning with ballet, which she took very seriously until her teens, when college basketball, studies and other vagaries of adulthood took over.

I forgot to mention, the best country music bar I found in Louisville, especially for dancing and camaraderie, is also a gay and lesbian bar. Casey Leek is the manager of Starbase Q and has run the place for four years. He bears an uncanny resemblance to heartthrob-of-the-month Sam Worthington (“Avatar”), sharing the actor’s sleepy, unimpressed eyes, high cheekbones and close-cropped haircut. “We were looking for something else to do and extended an invitation to the group,” he said.

The dancing group Leek mentioned does not specialize in routines built around house or dance music — what even a liberal mind would conjure when thinking of gay bars — but rather country line dancing. They meet every Friday night at the West Main Street bar.

When I entered the dimly lit back room with partitions separating the bar and tables from the hardwood dance floor, I felt as if I’d stumbled into an alternate dimension. Everyone wore boots. Authentic cowboys with mustaches, donning Stetson hats and tucked-in flannel shirts, held hands and laughed ecstatically. They stood off to the side watching others grace the stage. The first song the DJ played was a remix of Cher’s “Believe.”

I missed the straight hour of classic, vintage country music, but apparently, the dance moves were relatively similar — there was lots of clapping, stomping and swaying, each dancer’s moves identical, or at least complementary, to the others.

Vetter, perhaps the best and most experienced dancer on the floor, mentioned that people from Chicago, Cincinnati and Nashville travel to Louisville to take part in Starbase Q’s dance night. She also says the dancing group raised more than $1,200 for the Louisville AIDS Walk two weeks ago.

The next night, less than 200 miles north, outside of Newport, Ky., in a town called Wilder, a different honky-tonk hardwood floor is splintered and beaten for the multi-millionth time in 32 years. There is no DJ here. The music is live after 10 p.m. The man on stage also is the owner. His name is Bobby Mackey, and he probably knows how to play more country songs — obscure and classic — than any of you reading have heard. His hair is salt and pepper, long, dark, curly and wild — like a mix between John Holmes and Albert Einstein. He wears white cowboy boots with a zipper on the side, black tight-fitting jeans and a gray-and-black Hawaiian shirt.

When I first walked in, he was playing a Faron Young song, the title of which I could not place. Punkers, bikers, metal heads and, of course, cowboys and cowgirls brushed past me on either side. The place was like a modern-day Byzantium set in the middle of a massive roadhouse that was once a gambling hall — the billiards room to my right, the mechanical bull on a foam stage ahead of me, the bar to my left, and behind it, the crowded dance floor to which Bobby directed his crooning. It was causing sensory overload. On my way to the bar, a congregation of young men wearing trucker caps and Western shirts gave me the shit-eye. One of them mumbled something, and I stopped in my tracks.

“What’s up, Johnny Depp?” asked a regular at a bar where fights were reputed to break out almost every Friday and Saturday night, the only two nights the place is open.

Was he referencing the fact that both Depp and I are Kentuckians? Was he saying I was un-American since Depp is now basically a modern ex-Patriot? I knew it was not a compliment by the way he was glaring at me. I could not understand why he compared me to the gorgeous, talented Depp, other than the fact that I was wearing a suit coat. I surely did not resemble the actor physically, with my stringy hair and large head. I wanted to inquire further, but knew that if I got in a fight on assignment, I might not be asked to write again.

I scanned the barroom for a man I had no way of physically identifying. His name was R.J. Seifert, Bobby’s publicist, whom I’d spoken to about attending the show and doing an interview. He told me on the phone he’d been with Bobby since Bobby Mackey’s Music World opened almost 32 years ago, aside from a respite during which he detached himself from the business and began a lucrative career in real estate. As if psychically on cue, R.J. appeared at the bar and kindly introduced himself, dimples buttressing an earnest smile. He did not look the part of a businessman or a fan of country music in his parka with “Alaska” on the breast and a baseball cap. He looked more like someone’s father; he had the eyes and permanent half smile of a survivor and an adjudicator, a man who would listen to you even though he’d heard it all. R.J. ordered me a Sprite and asked if I needed anything else. He got me and some friends in for free and seemed genuinely grateful for me to shine even a small spotlight on the country music bar.

When the first set ended, R.J. finally was able to pull his old friend away from his people and lead him to an office that was once the money room when the venue was a casino. A disco ball hung from the ceiling, and an ancient icebox and safe, also left over from the gambling days, jutted out of the wall. Matt Coates, a mountain of a man who runs sound, security and oversees all repairs of the building, escorted Denise, Bobby’s fiancée, into the after-hours party room that only sometimes doubles as an office. Denise wore pink high-heels, a matching blouse and black nylon stockings. She and Matt both made sure I was comfortable and didn’t need another drink before the interview began. Matt breathed a sigh of relief when I told him I was fine and began pouring drinks from the communal bottle of Jim Beam sitting on the icebox — one for himself, one for Bobby, who sat like the last Godfather of Country Music with his legs crossed in a red sofa chair beside me.

The Godfather comparison also is appropriate since so many aspiring singers and songwriters come to Bobby for advice and a chance to open for him on stage. While Denise, curly haired and sweet-eyed, staring with wonderment at Bobby, sipped on a wine cooler, Bobby spoke candidly about the history of the business and his start as a country singer.

Bobby started his career playing at venues including The Apple, The Boulevard and July’s in Sharonville — all within 20 miles of each other, surrounding Cincinnati. At July’s, Bobby played five nights a week to a crowd of working-class men and women who busted their asses at the local plants — G.E., Ford, Avon — the workers getting off right around 11 and flooding the bars for post-shift drinks and the attendant decompression. Every night was like Saturday night to Bobby Mackey.

Bobby grew up in the little town of Concord, Ky., on the Ohio River in Lewis County, midway between Maysville, Ky. and Portsmith, Ohio. Music was Bobby’s life growing up.

“I didn’t go nowhere without my guitar,” he said. “I loved Hank Williams, Carl Smith, Faron Young … the people of the Grand Ole Opry of that day were my heroes. When I was 4 years old, I sang ‘Your Cheatin’ Heart’ in a talent contest and won first place.”

At this point, Bobby was just singing. When he was 8, his oldest brother, who lived in Michigan, sent him a Roy Rogers guitar for Christmas. His other two brothers received a BB gun and a bicycle. Bobby ended up playing music; Gary, who received the BB gun, wound up in Vietnam; Charles, who got the bicycle, retired from the Teamsters after years of driving a truck.

Bobby Mackey’s Music World opened in September 1978 after R.J. and Bobby met through WSAL-FM, the second country radio station in Cincinnati. R.J. had a journalism degree from the University of Cincinnati and was approached by Bobby, who talked about a nightclub he wanted to open and the oncoming craze of mechanical bull riding he predicted would be set off by the film “Urban Cowboy.” R.J. was sold, and the two flew to Houston and bought the bull from Gilley’s, the bar where the movie was shot. They had the bull at Bobby Mackey’s months before the film came out. The bull and the bar were overnight successes.

While Bobby has enjoyed a billboard hit with “Pepsi Man,” he is more concerned with playing music regularly for people who share with him a love for classic, honest country music.

Bobby and I talked for another hour about some of the largely unheralded songwriters and singers — from Tompall Glaser to Kentucky’s own Tom T. Hall. Before I knew it, I was onstage for Bobby’s second set, singing Glaser’s “The Streets of Baltimore,” harmonizing with the last Godfather of Country, at least the last one in the Ohio River Valley.

On my way out the door, the dark-haired dude who threw out the Johnny Depp comparison earlier, tapped me on the shoulder and said, with respect in his eyes, “Great singing, man.”