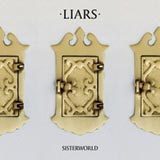 For their fifth album, the aggressively experimental Liars seem to have targeted a theme of psychosexual relationships, biological attraction, etc. The opening track, “Scissor,” finds the singer making an attempt to dispose of a woman’s body, but as the music leaps from quiet to loud, he discovers to his horror that she isn’t dead. Later, in the propulsively jaunty “The Overachievers,” he sings about buying a house with his sweetheart, where he settles down with cats, there wasn’t much to do so we just sat and watched the TV and smoked weed. The story is unusually mundane; strange that the band finds reason to rave it up. Notorious for their affinity for German industrial grooves, the band also draws on Butthole Surfers, The Flaming Lips and Sonic Youth. The curious result is an album that might appeal to fans of Brian Eno’s pop forays, like Another Green World, marked as it is by chanting, a consistent lyrical minimalism, and an ear candy production touched with delightfully small doses of an enormous variety of instruments and ideas. The deluxe edition includes an extra disc featuring remixes of the entire album by artists like Thom Yorke, Devendra Banhart, Boyd Rice and the Melvins.