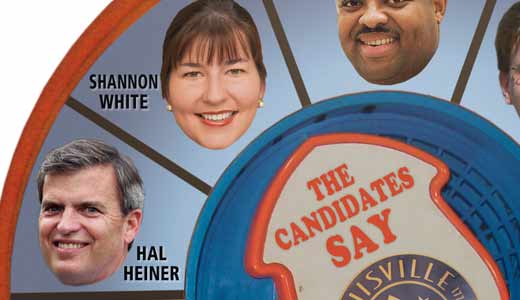 The amphitheatre of Central High School was, in retrospect, an apt location for the first live televised forum in Louisville’s ongoing, sometimes cringe-inducing mayoral primary. Featuring a cast of 10 characters, malfunctioning microphones and sound bite-friendly platitudes, the event was more of an amateur-hour production of “Pygmalion” than anything resembling a cogent political dialogue.

For an event this manufactured, however, why should voters even pay attention?

“To a large extent, the candidates don’t have enough time to clearly lay out their positions,” says Dewey Clayton, a professor of political science at the University of Louisville. “So what you get instead is a series of talking points and sound bites. But that’s important knowing they only have a limited time frame, so they’re trying to simplify their message. The danger with trying to develop your ideas before an audience is that one comes across as being too professorial, which turns voters off.”

Councilman Jim King, D-10, and Republican businessman Chris Thieneman — the only candidate savvy enough to look directly into the camera — were among those whose verbose answers were routinely cut short by the forum’s time constraints. As a result, the words “community” and “moving forward” were employed ad nauseum by other front-running candidates — so much so that many grammatically incomprehensible responses were crafted around those two phrases.

The worst offender? Councilman David Tandy, D-4, who also was the first candidate to plug his website that evening, and whose employment of the aforementioned words “community” and “moving forward” outnumbered his opponents’ usage of them nearly 3-to-1 on any given topic.

“Obviously, it’s not something like the wonderful Lincoln-Douglas debates,” says Clayton. “It’s useful for the public to make some assessment for themselves, since many campaigns are so largely media-driven, telling people how to stand and how to smile. We’ve learned a lot from the Kennedy-Nixon televised debate.”

Speaking of forced smiles, it’s notable that Greg Fischer ended each answer with what appeared to be a pre-scripted baring of teeth, punctuating the end of his statements like weird, robotic exclamation points. When asked about how he’d improve TARC ridership, Fischer ended his response with, “We can put Wi-Fi on the buses. We can have a more convenient ride, and work all the time!”

Regarding their stances on various issues facing Louisville, most candidates parroted elements of each other’s answers, most notably Lisa Moxley, whose placement after Tyler Allen in the question queue resulted in an echoing of his ideas. All candidates were guilty of this to some degree.

The major dividing line that emerged for voters seeking a tangible difference between the superficially similar panel of candidates was the issue of the $4.1 billion Ohio River Bridges Project. During the Rapid Fire Q & A, candidates were given a litmus test on the biggest issue facing not only the next mayor of Louisville, but also the future of the region for decades to come.

“We need the East End bridge so we have a complete loop around the city for commerce,” said Councilman Hal Heiner, R-19. “The downtown bridge is important because we’ve already taken our safety lanes away, which is important for capacity.”

Tandy agreed, noting the bridges plan will “create 50,000 jobs in the lifetime of the project,” despite the fact that it is far from shovel-ready, and regardless of whether that figure has any basis in reality.

Fischer jumped in as well, saying a two-bridge/Spaghetti Junction-expansion solution will make I-65 safer and that safety is, of course, a mayor’s chief concern. But the most egregious answer came from King, who equated construction of the project as-is as nothing other than our American duty.

“We are over capacity in downtown already,” said King. “If we are going to be a logistics hub in this country, we have to do the patriotic thing and that is open our lanes up to allow people to get in and out of Louisville.”

The first candidate to shoot down the bloated public works boondoggle was Shannon White, a Democrat, whose response (along with Allen’s) drew the night’s only rounds of applause from the oft-muffled audience. In addition, Moxley and Thieneman also said they prefer building an East End bridge first.

It was Allen, however, who articulated the sentiment best: “I believe we should build an East End bridge now. We do not need to build the downtown bridge, nor spend $3 billion on a 23-lane Spaghetti Junction only to move bottlenecks a quarter of a mile in any direction. And we especially do not need to be charging citizens in this community tolls in order to pay for all of that.”

Oddly (or not), The Courier-Journal’s account of the debate made no mention of the popular hot-button tolling issue. According to WLKY’s viewership figures, which are measured in intervals of quarter-hours, the highest number of households peaked at just over 30,000, meaning the rest of the TiVo-less citizenry would glean its knowledge the following day from the city’s paper-of-record.

“It’s ironic that The Courier’s article didn’t mention anything about the bridges despite the fact that they spent 40 minutes talking about it with (Tyler after the forum),” says Jay Perkey, a strategist for the Allen campaign. “I don’t think it was an oversight. They intentionally left out a discussion of the bridges. I believe that because the C-J has said and it believes that it’s a foregone conclusion.”

Michael Wray, campaign manager for the Thieneman campaign, agrees. “More or less, they’re trying to push through the current administration’s plan,” he says. “(The Courier has) their agenda set for how this bridges project should go. As Chris and Tyler both said, the discussion on this is not finished. There are better alternatives out there. The sad thing is we’ve been talking about this for 40 years but there hasn’t been a real discussion, and it’s not by accident.”

Professor Clayton points out that because there is so much uncertainty about the bridges issue — and tolling in particular — the candidates will face a multitude of questions on the topic.

“There is discontent over the toll issue, but one has to say, why?” asks Clayton. “There are a lot of people who live and work in Louisville and go back and forth to Southern Indiana. How will that toll affect them? Will it generate more income for the city? Will it cause more problems for the highways? More immediate traffic problems?”

The candidate who can best answer those questions, notes Clayton, is also uniquely poised to tap into a potentially galvanizing issue among the electorate-at-large, perhaps more so than with any other issue.

“Nobody likes paying for anything when they don’t have to,” he says. “And the tolling issue reflects that.”