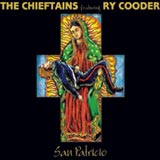 You may have doubts about the merits of this album long before the bagpipes started the Mexican Hat Dance. However, this earns its place as a unique artifact for history buffs as well as those who like international musical adventures. Chief Chieftain Paddy Moloney recruited guitarist/producer Cooder to help explore the regional song styles and lead appropriate musical folklorists in a concept suite about a fascinating, near-forgotten story. During the Mexican-American War, a battalion of conscripted Irish-American soldiers decided that the war was unfair, and they changed sides. Historians still debate whether the San Patricios were taking a stand against land-grabbing injustice — there’s evidence of less-noble motivations, and the American government quickly made the whole episode hush-hush. But Mexican citizens embraced the sacrifice of these men, and Moloney employs his group’s legendary collaborative facility to create a tribute that fluidly fuses Latin and Celtic sounds. Linda Ronstadt and Liam Neeson lend some star power, but it’s the many Mexican musicians who lend the set enduring shine.