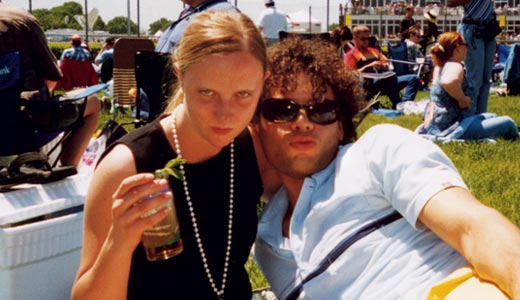 Among Louisvillians, there are two camps when it comes to the Kentucky Derby: those who want nothing more than to flee as racing fans, drunken mobs and Kid Rock-caliber stars descend on our city, and those who are overcome with a sense of childlike merriment this time of year.

Despite having a long list of gripes about the Derby and horseracing in general, I’m a lover not a hater.

Each spring, I suffer a Derby fever-induced case of amnesia that causes me to forget past experiences at Churchill Downs that were less-than ideal. I have been stranded. I have been sunburned and blistered. I have been rained upon and caked in mud. I have been forced to pee behind a shrub due to excessively long bathroom lines. I have even sustained minor head trauma.

And yet I keep going back for more.

It all started with my maiden voyage to the Derby: I was a junior in high school at the time and had spent weeks trying to convince my parents I was mature enough to venture into the bowels of Churchill Downs on Derby Day. Using some newfound skills of persuasion picked up in debate class, I managed to successfully convey the argument that I would not do anything stupid, like get arrested, disrobe atop anyone’s shoulders, or be trampled in the notorious tunnel to the Infield. (On all counts, by the way, I followed through on my promise.)

As I shuffled shoulder-to-shoulder through the general admission gate alongside thousands of other Derbygoers, I was in awe and admittedly a tad anxious. There were hordes of sweaty humans, many of whom I found to be surprisingly intoxicated given it was well before noon (how naïve I was). Upon traipsing into the aforementioned tunnel, my anxiety intensified: It was dark, dank, loud, crowded and slow-moving, a situation made worse by the fact that I was a mere 5-foot-2, and therefore literally unable to see the light at the end of the tunnel.

But just as it seemed a full-fledged panic attack was about to take hold, someone in the crowd began to sing. Next thing I knew, hundreds of strangers crammed into this underground concrete passageway began belting out “Lean on Me.”

It was ridiculous. It was surreal. It was utterly bizarre. It was Derby.

By the time the drunken revelers finished their serenade, I had arrived at the Infield. Almost immediately upon staking out a spot at the Third Turn, my underage cohorts and I were offered cups of “Derby Punch” concocted by three guys dressed as Elvis on the neighboring tarp.

“How very friendly,” I thought. “I love Louisville! I love Kentucky! I love Derby!”

I sipped on my lukewarm beverage and soaked in the sunshine and debauchery.

As the afternoon progressed, the drunken masses tired of seeing horses, bare breasts and the occasional fight, and instead sought a new means of entertainment: throwing shit.

It started as a good-natured, liquor-fueled food fight. As potato chips, lunchmeat and sticky libations rained down from above, I remained at my camp, amused by the scene unfolding around me, half-heartedly taking cover under a newspaper.

Then came the painful thwack.

Some unidentified flying object of the glass variety hit me square in the head. I had every intention of shaking off the pain and carrying on with my celebration, that is until one of my friends proclaimed something to the effect, “Shit. Oh my god. You’re like, bleeding.”

As is the case with most head wounds, no matter how slight, the bleeding just wouldn’t cease, forcing me to set out for the first-aid tent. There, a nurse patched up my head with some gauze, took down my contact information, and sent me on my slightly woozy way.

When my inaugural Derby Day came to a close, I removed the gauze, meticulously parted my hair on the other side to hide the wound, and headed home, where there would be no mention of blunt force trauma. For the next two months, my secret was safe — that is until Churchill Downs’ insurance company called to ensure I had recovered from injuries sustained on their property. It was awfully thoughtful — at least my mom thought so.

Despite the snafu, that inaugural Infield experience marked the beginning of what became an annual Derby tradition, at least through my mid-20s. Since then, I’ve celebrated several Derbies while living in other cities (which was always a letdown), and on a few occasions, I’ve had the good fortune to don a fancy hat and sit in the good seats.

Last year, I ventured to the Infield after a lengthy hiatus, and it was as chaotic, entertaining and depraved as I remembered. And while I’m eager to return to the madness, I might need a few more years to recover this time.