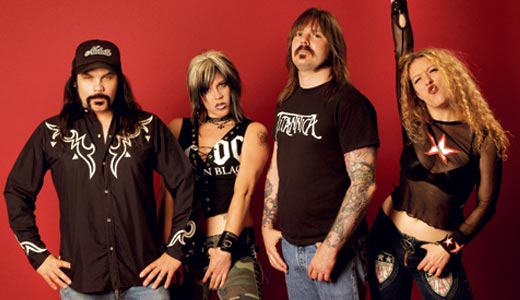 “Super Troopers,” Tony Hawk’s skate video games, and “The Sopranos” have all featured their profane, twisted, metal-tinged cowpunk. They’ve lasted 14 years on the strength of songs like “Hate And Whiskey” and “Keep on Fuckin’.”

When they stop here Thursday as part of their Parental Advisory Tour with Green Jelly and Psychostick, expect them to offend you on a deeper and more entertaining level than you have ever felt before. Kentucky is old stomping ground for guitarist Blaine Cartwright, who formed NP with wife Ruyter Suys following the 1997 demise of his previous band, Nine Pound Hammer. In 1998, NP’s debut album, Let Them Eat Pussy, received a Grammy nom.

LEO: Why do you play music?

Blaine Cartwright: To avoid getting a job, really. I’d rather ride around in a sweaty van and argue about food than have to work 9-5.

LEO: Do you get a better response in Europe, or in the South?

BC: Europe, definitely, especially France. I never thought I would feel at home there, but after a while, the U.S. started to feel more foreign to me.

LEO: You’ve done a lot of music for video games and movies. Do you think a band needs to do this to stay afloat now?

BC: I don’t know if they need to, but it definitely helps. I know that we made a sum of money off “Super Troopers,” but no one expected it to be such a hit. We’ve done more than just getting songs in movies, too. I got to punch Bob Odenkirk in the face for “Run Ronnie Run.”

LEO: How was meeting David Cross?

BC: We’re actually good friends. We’re (the band) on a bridge into New York right now, and I’m about to call him up so he can catch our show. We’re playing on a boat that’s going to the Statue of Liberty and back.

LEO: Have you ever gotten political, or thought about writing a political song?

BC: Honestly, we’ve probably talked about boogers more than we’ve ever talked about politics. I don’t even know what everyone’s (the band) stances are — at all. (Laughter in background.)

LEO: Why so many songs about fucking?

BC: Well, it’s more fun than fighting. Plus, shit, you gotta write what you know.

LEO: What’s the most extreme fan you’ve ever met?

BC: Well, most of them — the more extreme ones — are too weird and nervous to even come up and talk to us. There was one guy, though, who had a tattoo down his side that was me lugging a giant cross. Seeing that wasn’t as weird as I thought it would be. It was pretty fucking cool.

LEO: Are you more country or punk influenced?

BC: Well, I definitely grew up listening to punk. A lot of the attitude comes from that. Not like the music, but growing up in Lexington when I did and being a punk, well, you got a lot of shit. And I mean a lot — wherever you went.

LEO: How do you want people to feel when they walk away from a Nashville Pussy show?

BC: Tired. Well, also I want them to feel like buying me a drink.