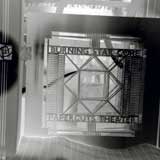 Burning Star Core main man C. Spencer Yeh of Cincinnati embodies a mutant combination of musicians Tony Conrad, Yamatsuka Eye and Klaus Schulze with his sophisticated violin, electronics and vocal histrionics filtered through his own distinctly 21st century sense of angst. On this collage of live recordings spanning more than a decade, Yeh is joined by Lexingtonians Robert Beatty and Trevor Tremaine (both of Hair Police) and various other nutters, including a horn section on the wonderfully disturbing third section of its four long sides. Overall, Papercuts Theater is a fiercely chaotic yet multifaceted tour de force constructed out of a myriad of seemingly disparate parts; almost if Yeh took Conrad’s classic 1972 album with Faust, Outside the Dream Syndicate, threw it in a blender, smashed the remaining bits to even-tinier bits, then meticulously glued the pieces back together.