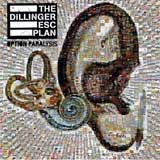 Same tricks, new riffs. That’s satisfaction as far as I’m concerned when it comes to metal in general. The slight problem — I don’t like Dillinger for the metal, but for everything else that was hinted at by Miss Machine, their first album with current vocalist Greg Puciato. Honestly, I haven’t been too terribly struck by anything the band has done since that album, which showed a real experimental push forward that found them somewhere between Mike Patton and The Fragile-era Nine Inch Nails. It was also the last to feature god-among-drummers Chris Pennie, who astounded with something usually lacking in drummers: sheer creativity. Option Paralysis sounds like the second half of Ire Works, except that their new drummer (third so far) is a step down from their last, who was a step down from Pennie. This is a band that kept promising to branch out, and instead has found a way to make incredibly complex music sound incredibly similar album to album.