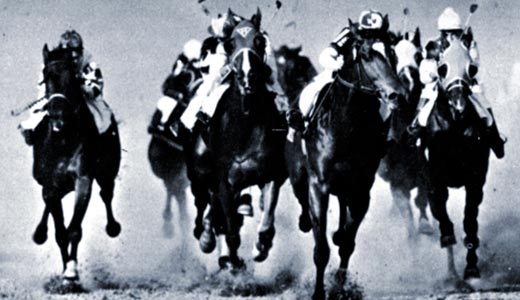 The Kentucky Derby isn’t what it used to be.

It used to be a rite of spring and a celebration of the horse that everyone, from the $2 bettor to the millionaire, shared. Today, it’s a monument to Mammon that little people can’t afford.

If only I could turn back the clock to those golden days of the Derby, the 1970s, the decade that saw Secretariat, Seattle Slew and Affirmed win the first jewel in their Triple Crowns.

Come dawn of Derby Day, I’d loop my binoculars around my neck, check my greenback supply, tuck my Daily Racing Form under one arm, and head for the Fourth Street bus stop.

In those days, you could ride a city bus to Churchill Downs on Derby Day for only $1. The bus ride itself was a hoot, happy handicappers joking and swapping tips and Derby insights and fantasizing about how they’d spend their winnings.

When I reached the track on Central Avenue, I’d be ambushed by an army of tip-sheet hawksters loud of dress and manner, promising winners on the day’s racing card for only 50 cents or $1.

Once inside the track — general admission was only $5 — I’d stake out a spot under a shade tree not far from the paddock and start handicapping the Derby and the undercard. Before each race, I’d stroll over to the rail separating general admission from the clubhouse and eye the pretty girls in their bright sundresses and wide-brim straw hats. That was almost as much fun as watching the horses, their chestnut, bay and roan coats resplendent in the sun, prance out of the tunnel and head to the paddock to be saddled for the upcoming race.

If I got hungry, I could drop by the cafeteria, where a lady with a mustache and arms the size of hams dished out plates of corned beef and cabbage, fat mounds of mashed potatoes with brown gravy, and bowls of spicy chili for modest prices.

Touts and pickpockets and “stoopers” were ubiquitous. Stoopers, often old ladies or men, picked up discarded pari-mutuel tickets, hoping to find a “live” one.

The crowd would be so dense by Derby time that you rubbed up against others everywhere, especially in betting lines, making it easy for pickpockets to ply their trade. I remember slapping a kid’s hand as he dove for my wallet.

Surprised, he yelped and darted into the crowd.

Beer smells and hot-dog sizzle, the odor of armpits, cigarette smoke, a whiff of perfume now and then, all swam together in the vast catacombs of general admission. It was hot. It was crowded. But it was bearable. After all, you were at the Kentucky Derby.

As the Derby drew nearer and the crowd swelled, the fever mounted. Everyone became frantic to pick the Derby winner. I’d ask the hot-dog stand girl, who sometimes got good tips from passing trainers, which horse she liked. Or the guy behind me in the betting line. Or the mustached lady in the cafeteria. Or a tout I knew with some claim to legitimacy, having once worked for a famous trainer.

When the University of Louisville band began to play “My Old Kentucky Home” as the Derby horses emerged from the paddock tunnel onto the racing oval, all the anxiety and joy of Derby Day exploded into song, a teary-eyed chorus of more than 100,000 belting out the words of Stephen Collins Foster’s classic. The Derby had arrived.

The bus trip home was usually an echo chamber of “woulda, coulda, shoulda” regrets. I vividly remember 1973, when a loser said, “For Christ’s sake, I’m a secretary. Why didn’t I bet on Secretariat? I’m so dumb.” But there was always next year.

The Derby was human back then. It was for everybody. The $2 bettor was as prized as the millionaire because he’d be back at the track time after time, long after the Derby was over and the millionaires had flown off in their private planes.

Today, the Derby’s gone corporate. It’s all about money. It’s about Millionaire’s Row and the Skye Terrace, Jockey and Trophy suites, and Trackside and Marquee villages for CEOs and their guests. It’s about amenities such as gourmet menus, open bars, private restrooms. It’s about sleek white limousines transporting the rich and famous to and from the track in the wake of screaming sirens and flashing red-and-blue police escorts.

Gone are the tip-sheet hawksters, the cheap bus rides to the track, and the modest admission and program prices. Gone are the stoopers and the touts. Gone are the shade trees near the paddock and the old bricks in general admission. Gone is the cafeteria where the mustached lady served the mashed potatoes and gravy. Almost gone are the Twin Spires themselves, buried between two massive blocks of high-profile betting suites.

It’s all sanitized now — more like a casino than a historic racetrack. Even the Infield, formerly the exclusive stomping ground of the “uncivilized,” celebrating their tattoos and bare skin and youth, has been castrated. Its choice section, overlooking the long Churchill stretch, has morphed into Trophy Suites for the “civilized” for $1,900 to $2,200 a seat.

That’s a seat in a tent in the Infield, mind you. Prized seats, whether on Millionaire’s Row or in the Skye Terrace or the third-floor clubhouse or Turf Club, command even loftier prices. Just to qualify for tickets, an applicant must first secure a Personal Seat License (PSL). This PSL fee, ranging from $3,000 to $60,000 depending on the seating location and number of seats, is a one-time fee for a term of several years. In addition, reserved seats to the Kentucky Oaks and Derby, ranging in price from $230 to $912, must be purchased by the PSL owner each year.

Well-heeled cheapskates can always opt for a $1,400 seat in the Marquee Village (tents) located outside Gate 10, in an area usually used for parking. These come with a free racing program.

What’s more, all reserved-seat tickets are hard to buy from the track. “All reserved seats for the Kentucky Derby/Oaks are sold by invitation, and the demand … exceeds our seating capacity,” says Kimberly Tobin, Churchill’s director of Premium Seating.

The strong demand for tickets has created a thriving scalper business. One scalper assures prospective customers he can deliver anything from a Grandstand Terrace (uncovered) seat for $500 up to a Millionaire’s Row seat for $5,000.

If you venture to the Derby these days, you might not see any live racing, much less the Derby, if you buy a $40 general-admission ticket to the first-floor paddock area. You’ll be on your feet all day — unless you find a spot to squat — and you’ll have to watch the races on TV.

The same ticket price of $40 also provides access to the “uncivilized” section of the Infield where you’ll have a seat, if you tote one in, and you might get a glimpse of a live horse. But you’ll be surrounded by Frisbee throwers, mud-wrestlers, exuberant drunks and topless revelers, both male and female. Step on a stomach, and you’re in big trouble.

You won’t be able to get pleasantly buzzed on the cheap, either, not when beer sells for $4 and a mint julep — whose main ingredient isn’t even bourbon but a 30-percent alcohol whiskey — costs $9. That an estimated 120,000 mint juleps are sold on Derby Day and Oaks staggers the sober mind.

You won’t be able to gawk at the celebs — they’re usually sequestered on Millionaire’s Row.

Nor can you reasonably expect to make a killing by betting on the Derby, because it’s a cavalry charge of 20 horses, young and still developing, going a distance they’ve never gone before. It’s the hardest race in the world to handicap.

That’s one thing that hasn’t changed.