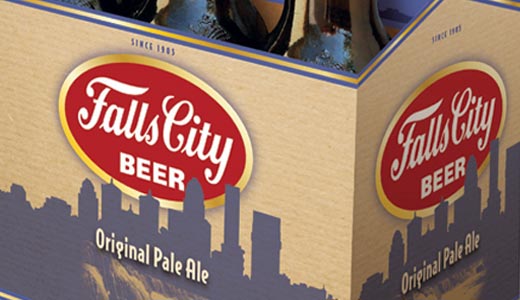 This is not your father’s Falls City beer. That’s what bartender Michelle Powell is quick to tell customers who see the trademark Falls City tap at Spring Street Bar & Grill near Clifton.

“At first, they laugh when they see we have it,” she says, noting that most people assume it is the fizzy, yellow lager that was sold under the Falls City name back in the late 1970s and ’80s before it was discontinued. “But it’s not the typical, run-of-the-mill beer we drank 25 years ago.”

The new version of Falls City is actually based on a 1930s-era Falls City “Old English Brand,” which was about 5 percent alcohol by volume; it’s hopped but still drinkable for most, and sales are going well, according to David Easterling, who now owns the brand (see interview on previous page).

“We don’t have the exact recipe for that (original) ale,” Easterling says, “but assumed it to be an English Pale Ale, which was also the most popular ale style at the time, so we brewed our new beer to that style.”

Falls City is now a true craft brew, and Easterling is confident the product can break through the early misconceptions. Seidenfaden’s Café is one of the places at which the new Falls City is not only on tap but greatly appreciated.

This Germantown bar was a big seller of Falls City back in the beer’s heyday, and the pub shows it — the outside facade features an original Falls City sign, and there are various pieces of memorabilia inside as well. Bartender Wink O’Bannon agrees that some people are initially confused when they see the beer on tap, but it sells well.

“Part of that is probably the novelty appeal,” he says, “but I’ve noticed people keep coming back to it. Once they try it, they return.”

O’Bannon says one regular customer, who previously rotated between Stella Artois, Harp and Boddington’s Pub Ale, now drinks Falls City exclusively. Not everyone is sold, though. O’Bannon notes that just a few years ago, every Wednesday was Falls City day at Seidenfaden’s — it was $1 a pop; the new version is $3.50 during the day and $4 at night.

“Back then, we used it as our hipster cache cheap beer,” O’Bannon says. “When I talk to people now who liked the old Falls City, sometimes they’re actually disappointed that this is so much better.”

Powell says the same thing has happened at Spring Street, at least until they understand what the new brand is about: “They assume it’s the same price as the PBR and the Stroh’s.”

Megan Bridgers is a bartender at the Outlook Inn, another local watering hole that proudly displays an original Falls City sign outside its Baxter Avenue entrance. She says the price point is sometimes an issue there as well — a pint is $4.50 at Outlook, but it was briefly priced at $6.50 when it was first released. Now that people realize what the beer is, sales have become steadier.

“When it first came out, people were tasting it and saying, ‘Oh, that’s not my grandfather’s cheap-ass beer,’” Bridgers says. However, she now sells “at least a couple” during every shift, and sales seem to be increasing.

Outlook customer John Brown says he’s not a fan of the Pale Ale style necessarily, but after having tried the new version, “It’s a lot better than the original Falls City.”

Or it’s at least better than the version most of us can remember. If one breaks it down, this isn’t your father’s Falls City — actually, it is technically much closer to being your grandfather’s, or your great-grandfather’s, back when the beer was brewed in Louisville. That isn’t such a bad thing.

“We felt an English Ale would appeal to a wide audience, be ‘sessionable,’ be true to the history of the brand, and give us a marked distinction from the light lager that was produced in the ’70s and ’80s,” Easterling says. “One taste, and you know you’re drinking a quality beer.”

Back at Spring Street, Powell says she has given sample tastes to countless customers since the beer came out, and “only one guy said he didn’t like it.”

Guess what, Grandpa? Time to dust off your palette.