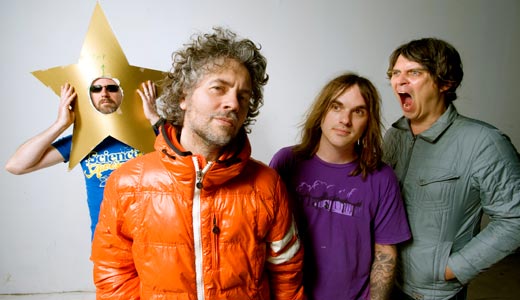 The Flaming Lips will headline the ninth Forecastle Festival this coming July.

The Flaming Lips don’t look like white whales, but they might as well have been for Forecastle founder J.K. McKnight. After years of trying to land them, McKnight finally got what he wanted. This spring and summer finds the Lips visiting the area a couple of months ahead, on April 22 at Indiana University in Bloomington. Head cheerleader Wayne Coyne takes a few minutes.

LEO: Embryonic has a more sprawling sound to it than At War With the Mystics. Were there things you were trying to do with this record that maybe you didn’t do before?

Wayne Coyne: Well I would say, because we did all those things before, you know, we were kind of left thinking — not in a panic — but kind of thinking, “Well, what do we do now?” That’s the worst thing that can happen to a group. You don’t want to keep doing the same thing over and over, or do the same thing you just did, but you don’t know what you want to do. So I remember talking a lot with the guys as we were making stuff, and sort of being like, “We should just do whatever we want, whatever music we get excited by in that moment, let’s do that.” But, of course, then we’d look at each other and say, “We already do that. Haven’t we done that for 14 records?” (laughs) We act like we have these manifestos of “We’ll do this!” — but we always have that.

So, in a sense, if we did things that we felt like, “Oh that’s just us doing our bag of tricks, and Wayne singing about the triumph of the human spirit again,” we knew that was coming and say, “I don’t know, do we wanna do that?” and then we would have these moments where we didn’t do that. We’d have these weird mantras about how worms are just as meaningful as the planets, and how the way you smell when you wake up is different than the way you smell when you die sort of bullshit. We’d have things like that, that weren’t necessarily pointing in this obvious celebration-of-life way that I think some Flaming Lips music is. Which is great, don’t get me wrong. But it didn’t sound like us singing, “Do You Realize?” And we didn’t know what to think of that. We’d say, “What is that shit? That’s cool, but I don’t know what it is.” Little by little, we would find ourselves making that type of music, and we felt very strange about it. There’s an element of Embryonic, that’s like, “Wow, that’s a cool record, I’m glad we made it. I don’t know why we made it, or if we’re even the group that should’ve made it, but we did.” So, it’s still a strange experience.

LEO: You followed that up with Dark Side of the Moon, a record that some would say is perfect and doesn’t need to be redone, but you took a stab at it. Did you keep any backlash in mind?

WC: With any sort of well-known, classic music like that, there are going to be these fans — and I would say fans will always act like this music is untouchable, because it is to them. I would say I’m a fan in that same sense. If someone was to remake Dark Side of the Moon, or some of my favorite Beatles records or Led Zeppelin or even Sonic Youth, I would say, “Hey, what are you doing!” But the musician, artistic side of me would say, “Cool, let’s see what this is,” even though in the age of the Internet, a lot of people can simply chime in, because they’re allowed to.

We were part of what I think is one of the first cover records that had some acclaim. We did a cover of Neil Young’s After The Gold Rush back in 1987 with groups like The Pixies, Sonic Youth and Swell Maps, and it was wonderful. This idea that these weird, underground, freaky groups were covering this very classic, mainstream sort of music I thought was great. We don’t really worry about what those types of people are gonna say. It’s always funny how, especially with people who love music, if someone attacks you, 10 people immediately come to your rescue. If you’re never attacked, you never get rescued, and it sits there kind of in limbo — “Well, I don’t know if I love it or hate it.” But the minute someone stands up and says, “You assholes deserve to die!,” 20 other Flaming Lips fans will say, “‘Don’t you touch them, motherfuckers!” I love that a lot more than everybody sitting in harmony.

LEO: What did you find out about Pink Floyd that maybe you didn’t know before, when you were getting inside of Dark Side of the Moon?

WC: That’s a good question. This music has been around — I was born in 1961, so it hasn’t been around my whole life — but since it came out, I’ve probably heard it every year and thought about it a lot. I would say that you don’t realize, on a musical level, how much David Gilmour is screaming a lot; it’s a very strange thing he does with his singing as opposed to earlier Pink Floyd records where he’s almost whispering. Some of it’s very intense. They’re also very funky in a melancholy, English way. It’s difficult to play these parts once you get in there and realize, “Oh, that’s the Rhodes with some distortion … that’s a guitar part with some delay on it.” They’re very intricately done, excellent arrangements that you are not aware of until you go to play it. Even a song that most of the world has heard, even something like “Money,” has a lot of interesting little bits that make it go along, and you don’t think of that until you have to dissect it.

On an overall, sheer creative side of it, it just really is hard not to be blown away by it. The simplicity of the lyrics, just the dimensions of the things that they’re talking about, singing about: suicide, uncertainty and your life going by, and should we be kind to people or should we care about strangers? Some of those things are hard to sing about but can still be cool and entertaining. And they do that. I don’t know if they meant to do it in that way again, but when you sing these songs, it’s like, wow, these are great lyrics. I try my best to not worry about lyrics that much, because if you worry about them, you wind up sounding like some pretentious fool. But you can’t help but be impressed by simple things. “All that you see, all that you touch, all that you taste, all that you feel” — it’s like, fuck man, I know you say shit like that all the time, but when it’s done in that context and that rhythm, it’s mega.

Whenever you climb inside music like this, you inevitably destroy some of the mystery, but for me, it also uncovers new things that are mysterious about it, new things that are special. You destroy one superhero, and another one emerges from the bones and dust.

LEO: How does a typical Flaming Lips rehearsal go?

WC: A lot of it starts off with, “Let’s make sure all of the stuff we’re going to bring on stage and all of our musical gear works.” The worst is to charge people $40 to see you play, and then the show doesn’t work, because somebody doesn’t have the right fucking cable that connects to your effects thing. So we’re making sure everything works, because the audience is expecting all this.

Then the second thing is, let’s see what we can do about some of the dynamics that maybe get sloppy when you play 20 shows in a row. “Remember, we were going to make that part really pronounced here, and I want to stand a certain way when I sing this part.” I know those things sound hokey, but you have to rehearse them.

The third thing is incorporating some new stuff from Embryonic, and you just gotta hope it sounds cool. Sometimes songs are really great, but they’re just not great as performance. That’s part of what we do as a group. “I know you like that song, but you’ll like this one better, because it has this certain dynamic.”