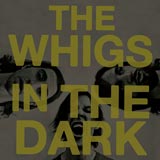 Someone once sang “With the lights out, it’s less dangerous,” but nothing feels less dangerous about being In the Dark with The Whigs. If anything there’s a feeling of edginess and menace that surrounds the entire album.

This Athens three-piece basks in the grit that shakes from their special brand of lo-fi Southern rock with a sense of sinister glee. The heavy, droning intro to “Hundred/Million” leads the song to an explosive refrain that kicks In the Dark off with urgency. “Kill Me Carolyne” has an infectious guitar riff that seems to run on a loop throughout, as singer Parker Gispert spins twisted lyrics about a break-up gone wrong. And the album closer “Naked” is a six-minute, experimental roll-in-the-hay with a band that usually stays grounded in typical power-trio arrangements.